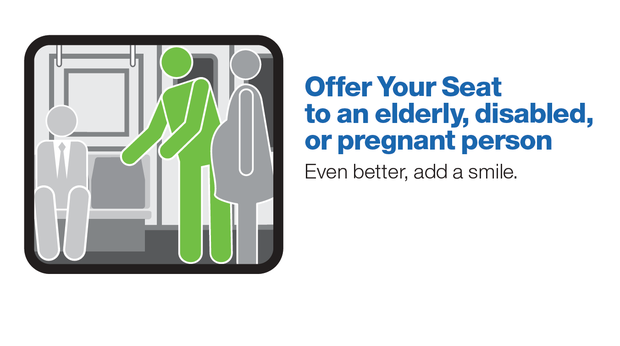 Pregnant on the NYC Subway: ‘Please, Sir, May I Have Your Seat?’

For a pregnant, working woman in New York, life can gradually become an unending series of headaches the farther along she gets in her pregnancy. I speak from the personal experience of carrying two pregnancies while living in Brooklyn and working in Manhattan.

Sometimes you feel like a minority being pregnant in this city of more than 8.4 million people, since only about 22 percent of New Yorkers are under 18 and 75 percent of households don’t include children of any age, according to U.S. Census data. Unfortunately, the census doesn’t track unborn children.

Surprisingly, most American metropolitan centers have even lower percentages of child residents, including Washington, D.C.; Seattle, San Francisco, Atlanta, and Chicago. Residents in many of those cities are more likely to use cars, though. Not the case in New York City, where more than 5 million people ride the city’s trains every day.

The various pitfalls of a daily commute by train for a pregnant woman are mildly entertaining—as long as you don’t have to live through it.

The life of a pregnant woman in her first trimester can be … nauseating. Literally. Dr. Jennifer Niebyl, head of obstetrics and gynecology at University of Iowa College of Medicine, tells WebMD that as many as 90 percent of pregnant women have some degree of nausea or vomiting, usually in the first three months.

With this in mind, imagine getting up and ready for work, going to the train, and then going up and down stairs to train platforms. Among the city’s 468 train stations, there are only 217 elevators and 176 escalators, according to the New York State Comptroller’s Office. They are frequently broken or in serious disrepair. The heightened sense of smell which occurs with most pregnancies coupled with nausea makes riding in a subway elevator that smells of urine (yes, you read that right) one of life’s most unpleasant experiences. That’s if you’re “lucky” enough to live or work near a station with one. I don’t.

Those precious few escalators and elevators are often in the same station, and often in Manhattan, where the cost of living is exponentially higher than almost everywhere else in the city.

Once on the train, an expectant mother faces the prospect of a rocking, rolling train that makes sudden, frequent stops. Sometimes conductors will take a sharp turn at a fast clip, sending passengers leaning unnaturally far off the handrails.

Before a pregnant woman looks pregnant, it’s almost futile to try and convince people to give up their seat.

Why not just sit down? Before a pregnant woman looks pregnant, it’s almost futile to try and convince people to give up their seat. The option of least resistance is often the only option: standing and praying you don’t take a tumble dangerous to you and baby, while trying not vomit.

The mid part of pregnancy is widely considered the “easiest” leg for most women. The nausea has subsided, the baby’s presence is cemented, and life is a bit more routine. You have a good amount of energy and haven’t gained much weight.

Personally, I’ve found my second trimester with both of pregnancies to be my most productive and least stressful. The train starts to present a new set of a problems, though. Put simply, it starts to become harder to stand and stay balanced for long periods of time.

A 2007 study in the scientific journal Nature explains how the body changes during pregnancy: “[T]he body must change in dramatic ways to accommodate the baby, and these changes affect a woman’s stability and posture,” said Katherine Whitcome, a postdoctoral researcher in the Department of Anthropology at Harvard University, and one of the study’s authors.

Basically, it gets harder to stand up on a rocking train and you have to get serious about finding a place to sit. This is when perfect strangers often start to advocate on your behalf.

Dear Sir, I moved from my seat for the pregnant woman in front of you not for you to jump in front of her and take the seat #NYCSUBWAY #RUDE

Once during my second trimester, I was standing in a train when another woman standing up noticed me.

“Do you want to sit down?” she asked loudly, to which I replied yes, but there were no empty seats. “Oh, don’t worry, I’ll take care of that if you don’t mind!”

She promptly turned to the nearest men and demanded one of them get up.

“I’ve had three kids in New York City,” she told me as I sat down a bit sheepishly. “Trust me, after the first one, you stop being shy about asking for a seat.”

By the last three months of pregnancy, getting around New York starts to become a serialistic nightmare. Some days are better than others, but life follows a general pattern of struggling just to get out the door, then walking rather slowly to the train, all the while hoping there will be a place to sit.

Officials do precious little to encourage or enforce any type of support.

There’s also an ad that vaguely suggests when a man should give his seat: “Offer your seat to an elderly, disabled, or pregnant person. Even better, add a smile,” the add glibly states.

It shouldn’t be a suggestion, it should be a law.

It’s much easier to tell if someone is old or using crutches than if they are lugging around another person. More than once I have actually had elderly or disabled people give me their seat while perfectly young, healthy people lazily sit and watch. One teenage boy, about 17, once refused his seat to me but helpfully pointed out that a woman who looked not a day under 80 was offering her spot.

I wonder what his mother would have thought of that.

America’s obesity epidemic doesn’t help during the third trimester, either. I can’t count the number of times I’ve gotten confused stares from passengers who are obviously asking themselves: “Is she pregnant, or just seriously fat? I really don’t want to deal with insulting her if she’s just fat.”

@WittyTexts I got an argument from a woman on the NYC subway for offering her a seat. She wasn’t pregnant. She was just really fat.

Disappointed with overwhelming no of NYC subway riders looking down when they see an obviously pregnant person #mta pic.twitter.com/Q0OuZMOUvF

This is where a woman’s internal radar detects those riders who are aware enough to notice you. Brief eye contact and a slight look of desperation will often do the trick.

“Do you want to sit down?” they will say.

Other times, the best approach is to find the youngest, strongest looking man on the train and be as whiny as possible.

If the train is horribly crowded, it’s bad news either way. I’ve been in trains so packed with people that I felt a simultaneous desperate need to get away from all the human bodies and to avoid confronting any of the aggravated passengers.

By and large most New Yorkers will yield gladly when you tell them you’re pregnant and need a place to sit. There are a few bad apples, though.

On a recent commute to work, I spotted an empty seat and walked toward it, just as a man was going for the same spot. He stepped in front of me and took the seat. When I pointed out to him, “hey, I’m pregnant can you let me have that seat?” he literally yelled at me that there was no way he’d get up and he needed to sit down more than me. I moved along down the train as he continued to yell for about five minutes.

That same day, on the way home the exact same thing happened with a young woman, except that this time her friend said, “No, she’s sitting there, sorry.” I guessed they were from a foreign country and stuck my pregnant belly in her face as I leaned down the aisle to ask a young man for his seat. He just stared at me blankly (perhaps foreign?).

It took some work, but I got a seat in the end.

If being pregnant in New York City has taught me anything it is this: you just can’t be shy about asking for what you want or take it too personally when you don’t get it. That, and I hope this is my last time as a pregnant New Yorker.