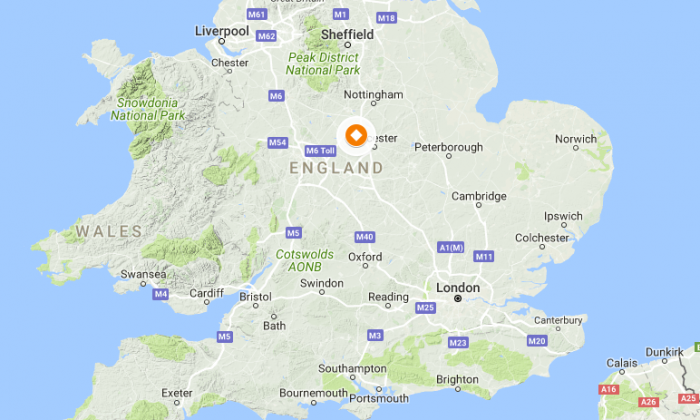 Location of Leicester in the U.K. (Screenshot via GoogleMaps)
UK

Pregnant Nurse Who Suddenly Died Has Daughter Delivered After Death

A pregnant nurse who suddenly died at her home gave birth to her baby after paramedics decided to carry out an emergency ceasarean on her dead body.

Emma Olubayo, 41, died suddenly after an undetected heart defect caused her heart to stop, according to reports.

After paramedics spent an hour trying to resuscitate the mother-to-be, they made the decision to deliver her baby on her living room floor in Leicester, England, not long after her death.

Her husband, Emmanuel Olubayo, 34, found himself becoming a widower and a father at the same time.

He recalled the last words that his wife said to him on that Sunday afternoon.

“I was all over the place like a madman, but I kept on talking to her, holding her head and kissing her,” he told the Telegraph.

“The last thing I remember her saying to me was ‘Quick cuddle,’” he said.

“It’s crazy how alike Aretha is to her mother, I see Emma in her every day, which does sometimes make it harder,” Olubayo told the Mirror.

“It was a surreal moment, our baby laid on the sofa behind me, whilst the love of my life was dying on the living room floor.

“Emma had battled to stay alive—I remember the way she looked at me, she was scared but she was fighting for Aretha,” he said.

He met his wife, Emma, in 2016 on a dating website, and they were married 10 months later, according to the newspaper. She had always dreamed of having a child.

“Although the pain of her being gone is indescribable, at least I have Aretha and Emma’s wish of having her own child has come true,” he said.

In a tweet, Leicester Hospitals said they were “shocked and saddened” at the sudden loss of their colleague on Nov. 26 last year.

They described her as, “always smiling, energetic, positive and completely dedicated to her role as a nurse.”

Olubayo spent six weeks at his daughter’s bedside in hospital, hoping she would pull through. He told the Mirror that his girl is “a fighter like her mummy.”

“Aretha has done incredibly well … and after spending six weeks at hospital has finally come home,” he said.