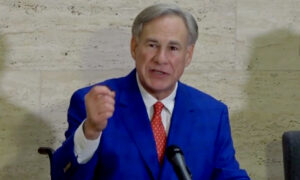 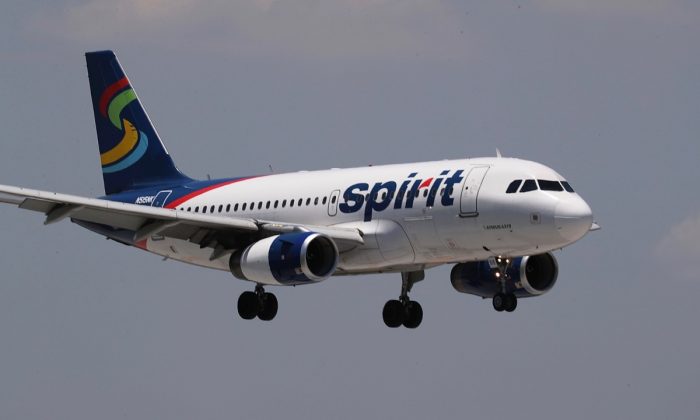 A Spirit Airlines plane lands at the Fort Lauderdale-Hollywood International Airport in Fort Lauderdale, Florida, on May 9, 2017. (Joe Raedle/Getty Images)
US News

A video spread widely on the internet shows a Jewish family being asked to get off an airplane in Florida because their 2-year old daughter wasn’t wearing a mask.

The Spirit Airlines flight from Orlando to Atlantic City was interrupted by the event—all the passengers had to disembark and were later allowed back on, according to the New York Post.

A flight attendant can be seen in the footage telling the family that they have to get off the plane due to “non-compliance” over mask mandates.

The 2-year-old girl is eating and sitting on the lap of the pregnant mother.

Her 7-year-old son, who was also present, has special needs.

“I told you, noncompliance—you’ll have to get off. I didn’t want to do this,” a flight crew member says in the video.

“She not wearing one,” the flight attendant said, referring to the young girl eating yogurt.

“The pilot wants you off, you have to get off,” says the flight attendant.

“She just turned two a month ago,” the mother answers.

A few passengers can be heard defending the family, with one woman telling the flight attendant that other children aren’t wearing masks either, and a man saying that he would make sure that the family would wear their masks.

After the arguing, the flight attendant warns that she is going to call the police, and then leaves.

The Epoch Times reached out to Spirit Airlines for comment.

“I have no words. Next level craziness. I understand if I gave someone attitude… but there was none of that. We were about to take off,” father Ari Eisenberg told Fox. “Everything was fine and all of a sudden someone comes over to us and asks us to deplane. We did comply, they had nothing to say. I kept asking what didn’t we comply with. They had nothing to say.”

Mother Avital Eisenberg told Fox: “My son missed his medication window. Thank God he didn’t have a seizure. He was sitting there in a soaking wet diaper because I couldn’t change him during the whole thing. My daughter is going crazy from all this, it was a terrible, terrible experience to go through let alone someone with a special needs child.”

The male co-worker who gave the instruction initially was reportedly not allowed back on the plane and was escorted away by Orlando police.

The father posted a video where passengers can be seen reboarding the aircraft, mentioning that the story has a happy ending.