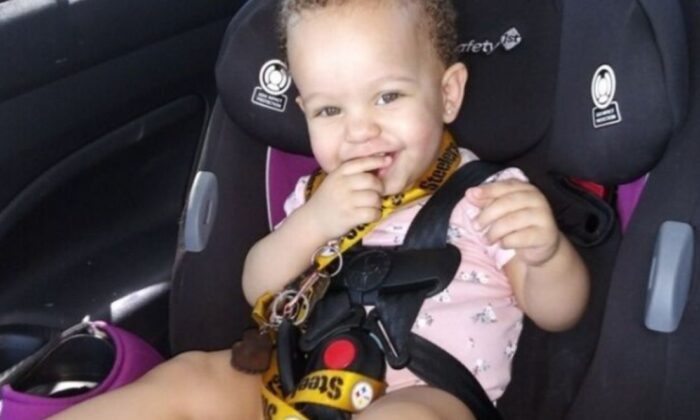 Madalyn Payton Slater in a file photo. (GoFundMe)
US News

A woman who said she is the mother of a toddler girl who died after being tossed from a cliff said there was also a domestic violence incident involving the suspect that left her hospitalized.

Adam Slater of Palm Desert, California, was arrested last May 6 after he allegedly stabbed a pregnant woman and tossed their daughter, who is one year old, over a cliff after their car crashed.

Ashley Grome, the girl’s mother, has said on social media that the girl’s name is Madalyn Payton Slater before she launched a GoFundMe page to raise money for the girl’s funeral.

“I am the mother of Madalyn Payton Slater, the one-year-old baby girl who was killed on May 6, 2020 by her father when he drove off of Highway 74 after beating and stabbing me, then leaving me to die in the Southwest Community Church parking lot,” she wrote. “My daughter was the absolute love of my life and she meant everything and more to me. Everything I did and everything I will do for the rest of my life is for her. She was beautiful and her smile was contagious, even after a bad day, she always cheered me up. She was taken from this world way too soon.”

Authorities said Adam Slater, 49, is facing second-degree murder and other charges in connection to the girl’s death, according to the Desert Sun. They described the attack as a “domestic violence incident.”

Slater is a registered sex offender and had a 1995 conviction for assault, serving two years in a state penitentiary before he was released in 1997, the report said.

They said Slater stabbed a woman, later identified as Grome, in a church parking lot before taking their daughter and speeding off in a car. He was tracked down by deputies on Highway 74 after he apparently crashed.

Witnesses then told officials that he stabbed a bystander who had freed his daughter from the crashed vehicle. Then he threw the child, according to witnesses in the Desert Sun report.

Slater was later captured by deputies after a chase. The toddler was discovered dead by authorities.

Family members were quoted by the Desert Sun as saying that Grome is six months pregnant. Grome was reportedly released from the hospital last week.

Authorities have asked that anyone with information contact the Central Homicide Unit at (951) 955-2777.

If you or anyone you know is a victim of domestic violence, please call The National Domestic Violence Hotline at 1-800-799-SAFE (7233).