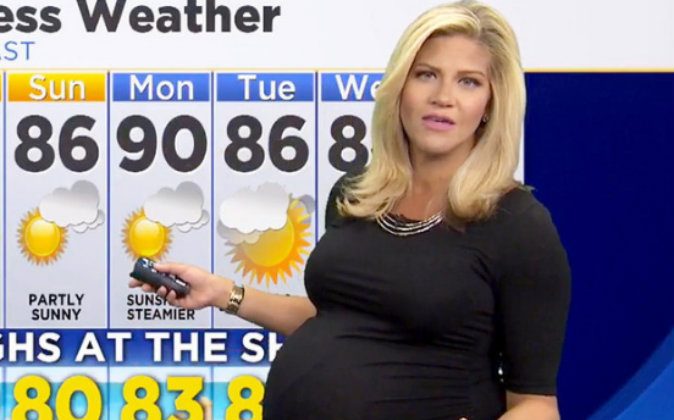 Pregnant Meteorologist Is Called ‘Disgusting.’ Her Response Is Perfect

Katie Fehlinger, a meteorologist at CBS 3 Philly, was working while pregnant for a number of months.

Now 35 weeks pregnant with twin girls, she hasn’t let her impending birth stop her from delivering the weather to her faithful fans.

I had a moment of clarity—I didn’t get embarrassed or hurt. I got fed up.
— Katie Fehlinger, meteorologist, CBS Philly

But some viewers have been expressing negative opinions about Katie’s growing baby bump.

She tried to ignore the hate but told Yahoo that a couple of comments set her off.

“The one that came in about the sausage in casing, that one upset me the most. I didn’t respond, I tried to move on, but it really hurt my feelings,” she said.

“Then I got another one this week, about looking ‘disgusting,’ and a switch flipped for me. I had a moment of clarity—I didn’t get embarrassed or hurt. I got fed up.”

Remember a woman went through the very same thing to bring YOU into the world.
— Katie Fehlinger, meteorologist, CBS Philly

Katie treated the comments as not only a slight against her, but against all mothers. So she took to Facebook to post a picture of herself pregnant and a “message for the haters.”

“This little manifesto of sorts is dedicated to every mother out there—other pregnant moms-to-be, moms reading this while their toddlers play on the swing set, moms whose kids have long since gone off to college… You are beautiful. Even during the most uncomfortable—and let’s face it, less than glamorous—symptoms of pregnancy, what women go through to bring their precious children into the world is, simply put, AMAZING and you should be lauded,” she said.

“Frankly, I don’t care how ‘terrible’ or ‘inappropriate’ anyone thinks I look. I will gladly gain 50 pounds & suffer sleepless, uncomfortable nights if it means upping my chances to deliver 2 healthy baby girls. Now it’s about more than aesthetics. I want these babies to have the best start possible. And that hopefully means my belly that ‘looks like it’s about to explode!’ will continue to grow the next few weeks.

“I say let’s raise a Shirley Temple to swollen feet, stretch marks, nausea, all the extra pounds and the dark circles! They’re badges of motherhood. And for those of you who think that’s ‘disgusting,’ remember a woman went through the very same thing to bring YOU into the world.”

Since posting the message, Katie has received a ton of pictures from other mothers and fellow newscasters showing support for her.

@katiefehlinger This is me 2 yrs ago, 38.5 weeks pregnant with twin girls. Keep rockin’ your lovely bump. #CBS3 pic.twitter.com/0XpN9W00rf

I loved my friend @katiefehlinger‘s post about pregnancy shaming. A pic from my last day on air – only 1 baby! #cbs3 pic.twitter.com/8ZHKdNSdGh

Fehlinger said in a later post that she’s grateful for the support.

“Beyond overwhelmed at the response! I NEVER expected this,” she said. “Thank you all for proving that outweighs the negative.”