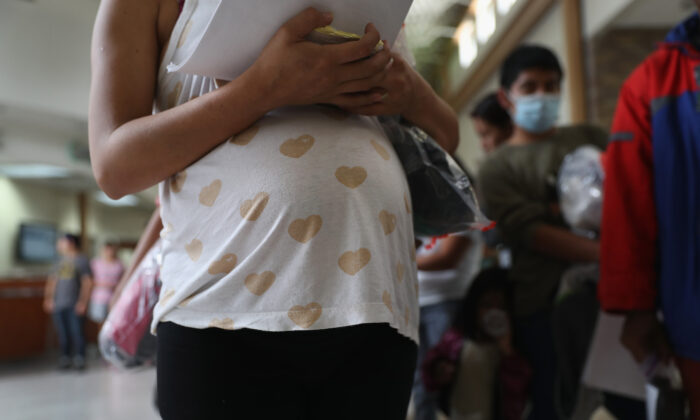 A pregnant Honduran immigrant stands in line with fellow immigrants for a bus to a U.S. destination from McAllen, Texas, on Aug. 15, 2016. (John Moore/Getty Images)
By Matthew Vadum

A crisis pregnancy center that assists pregnant women and newborns filed religious discrimination lawsuits in federal court to block two laws that force nonprofit groups and religious organizations in New York to employ people who are opposed to their beliefs.

A crisis pregnancy center, sometimes called a pregnancy resource center, offers women alternatives to abortion, including counseling about adoption, and sometimes financial assistance. Generally, such centers are operated by Christians, and some receive government funding.

EMC Frontline, a crisis pregnancy center, is hoping to prevent New York state from enforcing the so-called Boss Bill, or Senate Bill 660, that the state legislature approved in 2019. The measure forbids employers from discriminating against prospective hires on account of their beliefs about abortion. New York City enacted a similar law not long after Gov. Andrew Cuomo, a Democrat, signed the state-level Boss Bill in November, and the center is also trying to halt enforcement of the city’s law.

The Chicago-based Thomas More Society, a public-interest law firm specializing in religious freedom issues, filed one federal lawsuit against the state in Albany and another against the city in Brooklyn, on behalf of the center.

EMC Frontline is a business name. The plaintiff is actually the Evergreen Association, a small nonprofit headquartered in Yonkers, New York, according to its most recent publicly available IRS filing, which does business under the names Expectant Mother Care and EMC Frontline Pregnancy Centers.

Critics say the Boss Bill unfairly paints a bullseye on religion and doesn’t offer an exemption for employers such as churches or religious schools. They point to the Supreme Court’s ruling in 2018 in National Institute of Family and Life Advocates v. Becerra, which voided a California law that compelled crisis pregnancy centers to advertise abortion and contraceptive services to their clients. The law was struck down on First Amendment grounds.

The New York state law forbids employers from opting not to hire a prospective employee based on the “reproductive health decisions” of the person or his or her dependents, including “an employee’s personal information regarding the employee’s or the dependent’s reproductive health decision making,” including “the decision to use or access a particular drug, device, or medical service.”

Tim Belz, a St. Louis, Missouri-based lawyer who is special counsel to the Thomas More Society, told The Epoch Times that the two laws discriminate against religious individuals.

“It is a terrible law. I don’t know what gets into people,” he said.

Belz said laws in New York, including the laws at issue in the lawsuits, place his client in an untenable situation.

“The problem is they forbid advertising saying that you want people to agree with the purpose of your organization’s existence, so there are real free speech issues here.”

“A crisis pregnancy center and its director should not be forced to hire people who are pro-abortion,” Belz said. “It runs exactly counter to their mission.”

“The big claim that we have is freedom of expressive association, which is the right Americans have to associate with other like-minded people for educational, social, religious, political purposes—really all the reasons that the First Amendment exists.”

The Epoch Times reached out to Cuomo’s office for comment but didn’t receive a response as of press time.

The office of New York Mayor Bill de Blasio, a Democrat, did provide a comment.

“Employers should not discriminate against any worker based upon their sexual and reproductive health choices,” said Nicholas Paolucci, director of public affairs and press secretary for the New York City Law Department.

“We believe the city’s law is legally sound, and we’ll defend it accordingly.”

Three other organizations are suing the state over its law, the Times Union previously reported.

The National Institute of Family and Life Advocates, based in Virginia, CompassCare Pregnancy Services, based in Rochester, New York, and the First Bible Baptist Church, based in a Rochester suburb, filed suit in November 2019. Represented by the Alliance Defending Freedom, they say the law tramples on their religious beliefs and civil rights.