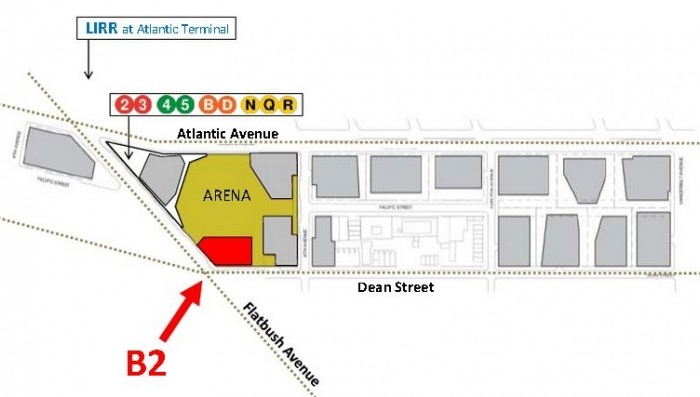 The B2 building will be the first of 19 planned buildings on the Atlantic Yards project, surrounding the Barclays Center. (Forest City Ratner)
US

NEW YORK—Two buildings set to rise, one in East Midtown, the other just outside downtown Brooklyn, will not look much different from any other building.

But the way the buildings will be constructed—using a method called prefabrication, where building portions, or modules, are constructed in a factory, trucked to the work site, and fitted together—could fundamentally change the way construction is done in New York City.

But elected officials and tradespersons (electricians and plumbers) are not pleased with the potential shift, saying prefabrication produces low quality buildings. Furthermore, the 32-story B2, the first residential tower planned for the Atlantic Yards Development in Brooklyn, will be the tallest modular building on the continent when completed.

That makes it an experiment, said Councilwoman Letitia James, who represents the district.

“I’m really concerned that this modular building will not withstand the test of time,” she said at a City Council hearing on Jan. 22 exploring the issues surrounding modular building.

Constructing large portions of the building in a factory brings multiple benefits—there’s more quality control, the building is projected to take 20 months instead of 30, and workers don’t have to brave the cold, according to representatives of Forest City Ratner Companies, the company behind the Atlantic Yards project.

The company invested much time and money into “cracking the code” of how to use modular housing for high rises, including traveling to the current tallest modular building in the Western world, a 25-story student dormitory in the United Kingdom.

“You wouldn’t know the apartments are modules when you walked around inside them,” said Melissa Birch, senior vice president for Forest City Ratner.

The materials are virtually the same used for traditional construction; only the process has changed, according to officials from the Department of Buildings and others involved in the industry.

But the change in process has struck an all too familiar chord. Construction jobs will become manufacturing jobs. Workers at the modular factory will make less, an average of $35 an hour.

The jobs remain union under a deal with the Building and Construction Trades Council of Greater New York.

Workers are allowed to be unlicensed, a risky venture, instead of going through the typical over 10,000 hours of training to be a master electrician or journeyman plumber.

“The training is serious enough that the State University of New York awards 40 Science and Math credits to Local 1 Apprentices based solely on the work they do in our program,” said Arthur Klock, director of training for the Plumbers Local Union No. 1 Trade Education Fund.

Concerns are that less experienced workers could potentially lead to lower quality buildings.

A row of modular townhouses across the street from the Atlantic Yards site has been sinking, according to Councilwoman James.

Was it because they were prefabricated?

“I don’t know,” she said in a phone interview. “I just know there were construction problems with that site, and there had been for some time.”

But Forest City Ratner representatives said the $117 million project, expected to be finished in 2014, doesn’t pose any problems.

The other 18 buildings planned for the Atlantic Yards project will be built using prefabrication, too, if the method is successful with the first one.