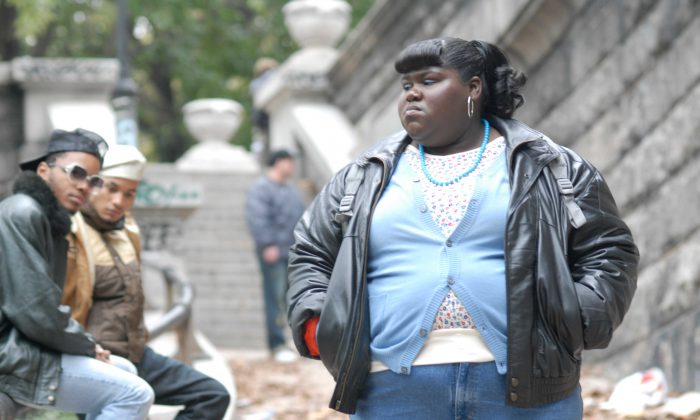 By Matthew Rodgers
Print
The early months of any new year brings a deluge of quality fare jostling for a place on the awards podium. We all know Oscar loves an underdog, or if last year’s “little film that could” is anything to go by, a Slumdog. So 2010 could become something of a Precious year, because this little festival favourite packs quite a punch. From its harrowing opening to its brilliantly optimistic final shot, it deserves a place alongside the Clooneys and Na’vis of this world.

Talk about a hard-knock life. Precious hits you full on in the face telling the story of its titular character (Gabourey Sidibe), an illiterate, overweight teen who is carrying her second child, the result of being raped by her own father. Living in Harlem with her neglectful mum (Mo’Nique), a woman who only pays attention to her child when focusing on her head as the target for an ashtray or empty bottle, Precious strives to find some purpose in her day-to-day struggle.

There isn’t too much that’s original in the “against all odds” narrative of Precious – it’s almost like you’re watching the story of one of the kids from Dangerous Minds that that film didn’t focus on. But that doesn’t mean every cruel twist and turn suffered by this young girl loses any impact, and that’s mainly down to an amazing cast.

Gabourey Sidibe is wonderful, initially unable to express her feelings, which are so eloquently introverted in the character voiceover. The moment a smile cracks on her face you’re right there with her as a shard of light appears in a life riddled with pain and hopelessness. You root for this girl to break free of her social constraints and it’s all thanks to this stunning debutant.

Picking up a Golden Globe for her performance as the revoltingly absent matriarch, Mo’Nique is surely a shoe-in for the Best Supporting Actress award. She plays this void of humanity so well that her escalating histrionics never descend into farce. She is a monster incarnate, at times terrifying with her violent outbursts, and disgusting with her disdain for those close to her.

The obvious marketing tool of Mariah Carey sans orange glow is also extremely successful. In her few brief scenes as the welfare officer she wipes most of the Glitter from her acting CV with an understated (a word you never thought would be affiliated with the diva) performance.

In a movie of discoveries, director Lee Daniels also warrants a round of applause. It’s quite a minimalist story that could have felt stagey in its telling but Daniels weaves it with some distinct flourishes. The dialogue is often given a poetic reading – even the profanity laden lines – and at times when other directors may have chosen to shock, he never loses focus on the fact that this is Precious’s story. So he cuts the abuse scenes with some inventive daydream sequences that allow both the audience and characters some escapism from the bleakness.

Precious is a film that’s much like the journey taken by its young narrator: it’s extremely punishing but very, very rewarding.