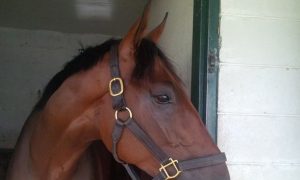 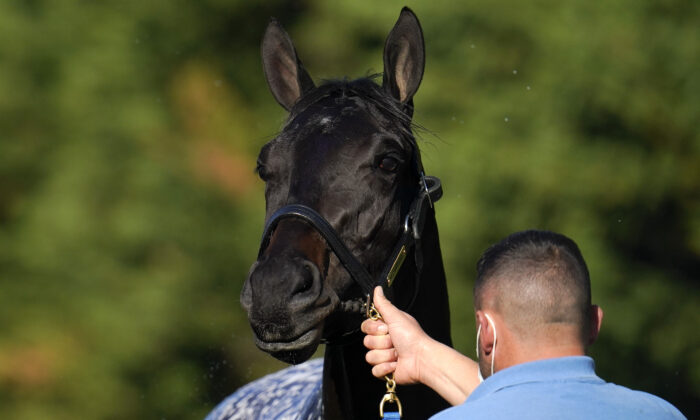 Kentucky Derby winner Medina Spirit is groomed after a morning exercise at Pimlico Race Course ahead of the Preakness Stakes race, in Baltimore, Md., on May 11, 2021. (Julio Cortez/AP Photo)
US News

BALTIMORE—Medina Spirit is set to run in the Preakness Stakes on Saturday to go for the second leg of the Triple Crown, as long as the Kentucky Derby winner passes a series of additional drug tests.

Maryland racing officials reached an agreement with trainer Bob Baffert on Tuesday to allow Medina Spirit and his other horses to enter races this weekend at Pimlico Race Course subject to extra testing and monitoring. If Medina Spirit, who failed a postrace drug test after winning the Kentucky Derby, comes back clean in test results expected Friday, he is likely to be the favorite to win the Preakness.

“We reached an agreement with Mr. Baffert and his lawyers that allows for additional testing, additional monitoring—essentially a watchlist to ensure the integrity of the sport leading up to the race,” Maryland Jockey Club lawyer Alan Rifkin said. “We’re very pleased to have that and we appreciate Mr. Baffert’s patience and the way in which his lawyers went about it.”

Medina Spirit, fellow Baffert-trained Preakness colt Concert Tour and filly Beautiful Gift, who is expected to run in the Black-Eyed Susan Stakes on Friday, are all subject to the extra scrutiny.

“Baffert has given these consents to further the interests of horse racing and the public,” lawyer Craig Robertson wrote in a letter to the Maryland Jockey Club. “The integrity of the sport is of the utmost importance to Mr. Baffert, and by consenting to this testing regimen and monitoring, he reaffirms his commitment and dedication to the sport.”

Medina Spirit drew the No. 3 post in a field of 10 horses for the Preakness as the 9–5 morning-line favorite. Concert Tour drew the outside 10th post and is the second choice in the wagering at 5–2.

Keepmeinmind and Midnight Bourbon are the only Kentucky Derby horses returning for the Preakness to challenge Medina Spirit. Trainer Brad Cox opted to skip the race with Mandaloun, who would be named the Derby winner if Medina Spirit is disqualified, and Essential Quality, who went off as the 3–1 Derby favorite.

Medina Spirit won that race May 1 as a 12–1 long shot. He won’t be anywhere close to that if he gets to the Preakness.

“To me, if everyone runs their race that we have seen from them in the past, I think this is Medina Spirit’s race to lose,” NBC Sports analyst Matt Bernier said.

Baffert earlier Tuesday said it was brought to his attention that a veterinarian treated Medina Spirit with an antifungal medication to treat dermatitis that includes the steroid betamethasone. Medina Spirit failed a post-Derby drug test because of the presence of betamethasone.

Stronach Group chief veterinary officer Dr. Dionne Benson said at the Preakness draw that test results on the three Baffert horses are expected back Friday. This is an additional layer of blood testing from blood taken last week, Monday and Tuesday on top of the usual postrace tests.

“(The tests) will allow us to ensure that if there is or was any betamethasone or any other medications, whether therapeutic or illegal, in the horse, we will know about them before the race,” Benson said. “Because traditionally most of the testing now will occur after the race, and this allows us to, instead of addressing the issue after the fact, to prevent the issue from becoming a problem.”

Benson said if betamethasone is detected by laboratory testing in any of the horses, officials will ask Baffert to scratch that horse.