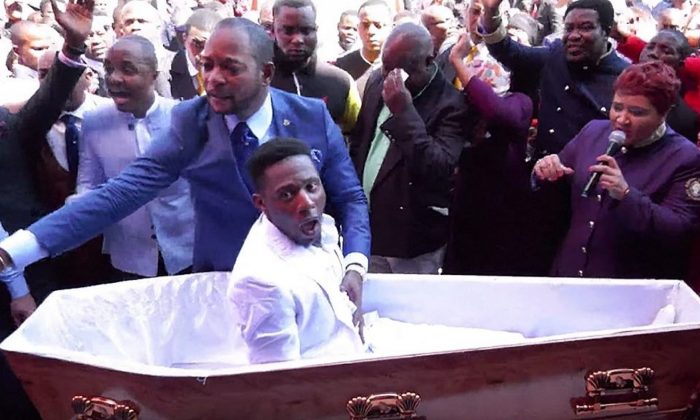 A still from the video of the moment a man apparently came back to life in a video posted on Feb. 26, 2019. (Ralf Lukau/Screenshot/Facebook)
Africa

A self-styled prophet is facing several lawsuits over a viral video in which he appears to bring back to life a dead man in his coffin after the family dropped in on their way to the funeral.

A group of funeral directors in South Africa, and a bishop have said they will sue the Rev. Alph Lukau and his church for the “plot.”

In the video posted to his official website. Lakau leans over a man dressed in white in his coffin, holding his hands over him, before telling him to “rise up” as he touches him.

The figure in the coffin jerks upright, and the crowd cheers.

The video, which was posted on Feb. 26 on his official Facebook page, quickly went viral on social media. Many people suggest that the man can be seen breathing in the video.

I’ve seen much better acting than this 😂😂😂😂😂⚰️ pic.twitter.com/uuksTCEfBm

Other people point out that the man in the dozens of crystal-clear images—posted to Lakau’s Facebook site—appears to be his photographer.

Lakau claims to have performed all kinds of miracles in the past.

The church claimed the man’s body was being taken north of the border to his funeral when the family happened to decide this was an opportune moment to visit Lakau, reported the South African.

Lakau now denies having claimed that he “resurrected” the man.

It later emerged that none of the three funeral companies involved had seen his corpse.

After the video exploded on social media, the three funeral companies claimed that Lakau had played them off against each other in a “scheme” to get hold of a coffin and a hearse.

“We are in the process of taking legal action for this malicious damage to our image,” said a statement by one of the companies.

A lawyer representing the three funeral parlors told reporters that none of them ever had a corpse of the man and that the companies were only aware of the “plot” after the video went viral on social media.

Together with criticism, Lakau’s video antics spawned a set of memes on social media, under the Hashtag #ResurrectionChallenge

According to local media, Lakau’s church, Alleluia Ministries appears to have changed its version of events, and now says he did not actually raise the man from the dead, and  that he was “already alive” when he arrived.

Deputy Chairperson of the CRL Commission professor David Mosoma told South Africa’s national broadcaster, “Resurrection means suspension of the laws of nature. When somebody claims to have suspended the laws of nature when someone has passed on, it means there must be credible witnesses, a certification that the person is dead, the person must be in a registered morgue. The morgue must certify that this person is dead. All of these things are the questions we are asking ourselves, how did this happen?”

South African Bishop Elly Mogodiri has also opened a criminal case against the preacher, according to South Africa’s Times.

“I have seen too much pulpit greed and commercialization going on in the church, among other disturbing practices,” he said. “”I am aware and have been duly advised that this case falls within the ambit of organized crime, fraud and misrepresentation, among other misdemeanors.”

According to the Times, police confirmed a case had been lodged.