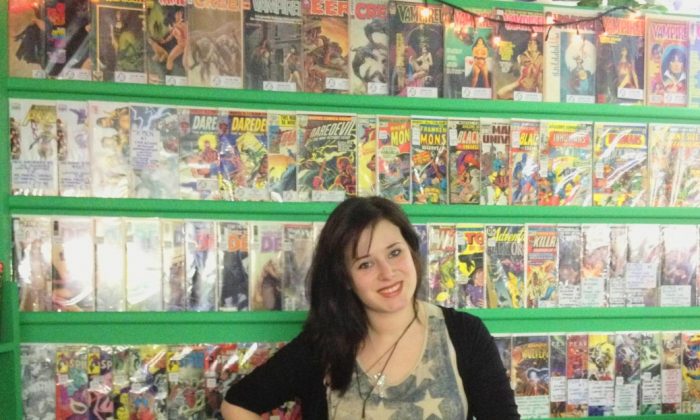 Lucy Myatt, owner of Level UP, stands in her shop in Liverpool, England. Like others in the used game market, Myatt is facing an uncertain future amid rumors of technology to block used games on new consoles. (Courtesy of Lucy Myatt)
Europe

LIVERPOOL, England—The business of pre-owned games is only growing, and this has some games companies a little too concerned. The problem with used games, in the eyes of developers, is that it may cost them more in lost revenue than piracy.

There is broad speculation that the upcoming Playstation 4 and Xbox 720 will have features to block used games, but does that protect the industry or just harm the consumer?

One business that thrives on the trading and selling of previously owned goods is Liverpool, England-based retro video game and comic book shop Level UP, owned by Lucy Myatt.

The 24-year-old businesswoman founded her store in 2010, first selling items from her own collection before expanding into trading with customers in store and selling them online.

While a Sony patent to restrict the second-hand market does not confirm anything yet, it does suggest a possible reaction from companies if they feel their profits suffer from the pre-owned market.

“The whole pre-owned business is a little scary for us,” Myatt said. “I’ve always been a strong believer in what you own is your property, and I don’t see IKEA banning you from selling your unwanted furniture online.”

“However, you can’t deny that pre-owned does put a dent in the industry, and I would hate it to push companies to make fewer games,” she said.

A lot of older games are re-released though HD remakes on the latest consoles and as downloadable versions through Xbox Live Arcade, Playstation Network, or Nintendo e-shop, but as Myatt and other used game outlets have found, consumers still prefer to buy the original product second-hand.

Myatt believes it is the past experience of playing the title that brings customers back to buy it in its original form.

“Collectors and most die-hard gamers will always want the original, it’s what they played on as kids, and for them (and me) nothing else will ever bring that nostalgic feeling back if you are not holding that controller from your childhood.”

Level UP’s business has gained so much popularity that it is seeking online investment in order to expand into a bigger home on the high street and turn itself into an arcade café.

If the pledge succeeds Myatt hopes to give the city of Liverpool a true social hub of retro gaming and comic books where people can share their passions.
The trading of pre-owned games is a major way for companies to make an extra profit, with Gamestop in the United States reporting that pre-owned accounted for nearly half its profit in 2010 and pre-owned sales increased in 2011, with the company pledging to focus more efforts on the market within the next year. How devastating could it be if the games giants act to wipe out the market?

Sony and its competitors could seriously harm the very people who sell their products and be adding insult to those who buy them—folks who are already loyal enough to seek out older products at retro stores. Already there are calls online to boycott next-generation game consoles if the technology to block used games comes through.

For Myatt, the recent developments raise yet another problem. Independent businesses like Level UP are about more than making money—they are providing social interaction among consumers for products and a medium that they love.

While the discussed actions of console developers are arguably to stop the more recent releases being re-sold, what will become of the next generation of retro gaming if the fate of its products is already decided as being playable only once?

Peter Harris is a reporter for TechZwn.com. He is based in Liverpool.