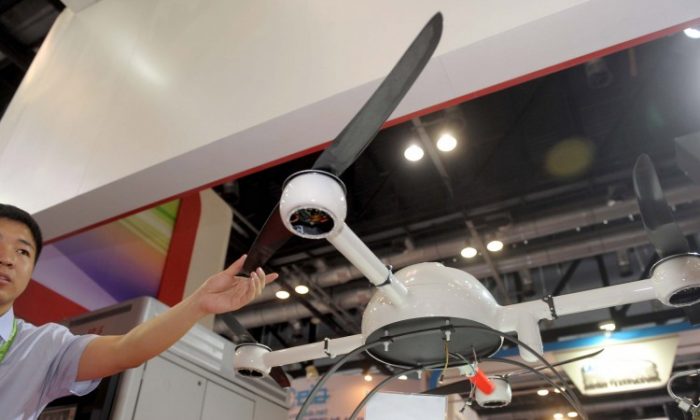 In this photo, taken on May 22, 2012, a surveillance drone is displayed in Beijing. The drones that China plans to deploy for coastal surveillance are small, propeller aircraft that can take off from ships. (STR/AFP/Getty Images)
China

China demonstrated its new six-rotor drone and other unmanned aircraft technology last week in Beijing at the Aviation Expo China 2013.

The unmanned aircraft which captured the most attention from attendees was the satellite-linked CH-4, a six-rotor drone which was being compared to the U.S. military’s Predator UAV, reported Japan’s Asahi Shimbun.

“The drone can attack targets located 5,000 meters below,” the manufacturer’s engineer in charge of technological development told Asahi Shimbun, a Japanese newspaper. “It can also carry out reconnaissance activities and do mineral and geological research. Its abilities are equivalent to those of the U.S. military’s latest drone.”

The CH-4 can carry four to six missiles. Its body, rotors, and undercarriage are constructed of a carbon fiber composite; it has an operational range of 3,500-kilometer and a 40-hour flight capability, said state media. It is capable of vertical take off, and has successfully passed flying and bombing tests.

Beijing announced at the expo that is planning to begin construction of a “Beijing UAV industry base,” which will take about three years, reported state media. The industry base will be located in the Daxing District and will cover product development, test flights, marketing services and business applications as a whole.

“We believe the attack was largely successful,” Darien Kindlund, manager of threat intelligence at the cybersecurity company FireEye, told Vice. “It seems to align pretty well with the focus of the Chinese government to build up their own drone technology capabilities,” he told the New York Times previously. Motherboard said that many of the drones the PRC has look like clones of American models.

China has begun deploying unmanned aircraft for surveillance of disputed territories in the South China Sea and has admitted to flying a drone near the disputed Senkaku islands. Japan’s Defense Ministry is studying a plan for shooting down drones that invade its airspace, according to NHK, a Japanese media.