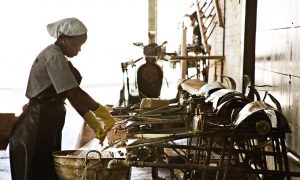 Of Pirarucu Skins and Other Sustainable Things
0 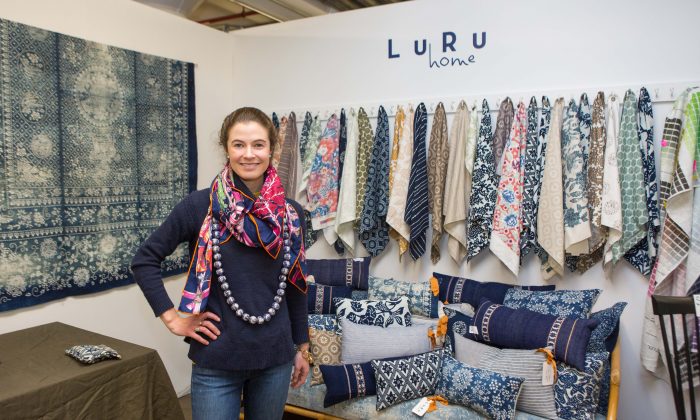 NEW YORK—”It started with Dr. Schutte, the president of Pratt who saw Al Gore’s film, ‘The Inconvenient Truth.’ … He came back to this campus and said, ‘We have to do something,'” said Debera Johnson, executive director of sustainability at Pratt Institute, as she enthusiastically described the successes of the Pratt-initiated Brooklyn Fashion and Design Accelerator (BFDA), a 21,000-square-foot hub for ethical fashion and design located in the former Pfizer building in Williamsburg.

Launched in October 2013, the BFDA has been providing designers with the resources they need to transform their ideas into successful sustainable businesses. Johnson said Pratt’s president “wanted to create a role at Pratt that wasn’t just about the facilities,” but more about weaving sustainability into the curriculum.

Since its inception, the fashion hub has hosted more than 7,000 people, helped four companies grow their businesses and transition into their own spaces, and collectively increased 12 designers’ revenues by over $800,000 while reducing negative environmental impacts.

To celebrate the past year of successes, the BFDA hosted the Positive Impact Awards on Nov. 16 to acknowledge those who have been a source of inspiration in advancing sustainability.

The idea of a sustainability curriculum really started in 2002 with the Pratt Design Incubator for Sustainable Innovation—Johnson calls it a smaller version of what the BFDA has become. Pratt’s incubator helped to create over 30 new companies and more than 50 jobs in the sectors of fashion design, product design, social entrepreneurship, and green consulting services, according to the 2013 press release.

President Thomas Schutte said the incubator was created to get Pratt graduates started in “making things,” rather than taking on jobs as design consultants.

The incubator transitioned from assisting one business at a time in various design sectors to the BFDA, which helps 20 businesses at a time focus on sustainable fashion.

“Currently, we have 20 companies in the program, but we’re looking for five more,” Johnson said. The participants’ companies range from menswear and womenswear, to accessories and jewelry. The selection process is open, but space is limited so interested designers must demonstrate a genuine commitment to sustainability. “It’s not sort of the ‘I want to,’ but ‘I really want to,'” she stressed.

The program is geared toward people who have already started a business, but just haven’t been able to get it off the ground.

“They have a great product, but they’re not great business people,” Johnson said.

The BFDA has experienced entrepreneurs available to help with the financial side, the distribution side, the marketing side, and the sustainability practices that are going to be implemented. And because the designers are all working together under one big roof, they can serve as resources for each other.

Another criterion is that the applicant fits into the community of designers—the community is one of the most important things, according to Johnson.

“We also have to consider new businesses against the businesses we have so there’s not the sense of competition,” Johnson added. Participating designers may be targeting a similar market, but they are not usually making a similar product. They should feel that they are actually sharing and achieving success together, she said.

And with the larger facility, Pratt has expanded its reach to include designers who didn’t necessarily graduate from Pratt. “While we have a lot of students at Pratt, we have 4,800 students, but many that you see here are from many other colleges and universities,” Schutte said, gazing around the room where the awards ceremony would be held that evening. “So the fact that we don’t restrict this to just Pratt I think is distinctive,” he beamed.

The Positive Impact Awards ceremony on Nov. 16 honored awardees such as Eileen Fisher, CEO of the Eileen Fisher clothing line, who set a goal to be 100 percent sustainable by 2020. Rather than the typical statue or plaque, honorees received knitted alpaca scarves. Ms. Fisher received her scarf for Corporate Leadership in Advancing Sustainability.

The 15 honorees also included BFDA Venture fellow Teel Lidow, founder of Boerum Apparel, who received the Sustainability Lab (s. LAB) Award. Lidow launched his company in 2013 and takes pride in his ethical production, which traces textiles back to the original farm where the cotton was grown. Now BFDA offers consulting services through its s. LAB to NYC designers so they can create sourcing maps of their own.

And while the evening was all abuzz, some of the designers set up pop-up shops to display their wares to potential shoppers.

Recent Pratt graduate Caroline Kaufman, said she was lucky enough to get in the BFDA shortly after it opened and she has been operating her business, called Caroline Kaufman, at the hub since graduating in 2014.

Kaufman, 23, who studied fashion design said everything she does is art-based, so in the last year she has been selling paintings, cards, and prints as well as high-end fashion. The transition from student to business owner did not come without its challenges, and Kaufman admits that starting a business is “really tough.”

But like Johnson and Schutte said, not all of the designers are Pratt graduates. Blair Lauren Brown and Claire Russo moved to BFDA for the opportunity to continue developing their sustainable businesses.

“I think this is one of the better initiatives that’s happening in terms of fostering … up and coming designers,” said Brown, a jewelry designer from Alaska. She likes the BFDA community because it connects her to other people who are similarly minded.

Brown, 33, is carrying on the family business, which started in Alaska in 1901. A fourth generation jewelry maker, she designs raw gold nugget jewelry and uses the same miners that her family started with, so she has better control over the metals that she uses. “I’m working with grandsons and sons of the people that my grandfather worked with,” she said.

Russo, co-founder of Luru Home, came all the way from China to BFDA. Originally from Connecticut, she started her company in Shanghai, China, while learning a thousands of years old traditional dying technique that is the sustainable base for her products. She heard about BFDA through word of mouth in 2013.

Russo, 28, was planning to move back to the United States with her company and said, “Having a home base within a bigger group of people who would have connections and ideas, and would help ease our transition as we moved back to the States,” was one of the more appealing aspects of the program.

She uses traditional Chinese textiles and Chinese design to create a contemporary line of fabrics, which are sold by the yard to the trade and retail consumers. She also turns the fabric into products, home accessories, and gifts.

Johnson attributes part of the success of BFDA to being located in Brooklyn, which she called “the creative center of the universe.”

Indeed, it appears that BFDA is the place to be these days if you really want to grow your fashion business. The Pratt Institute is ensuring that its graduates as well as the fashion community at large get an opportunity to do just that.