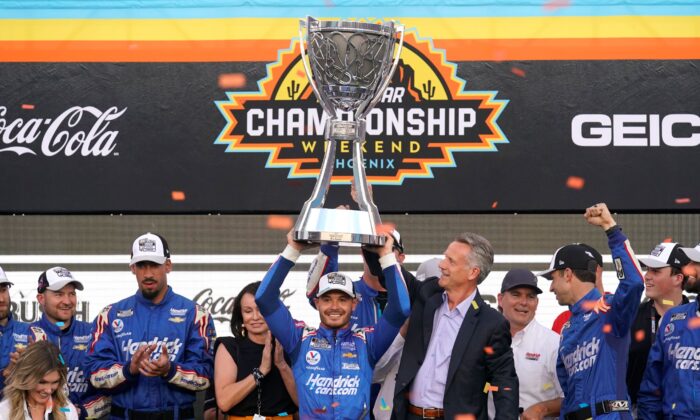 AVONDALE, Ariz.—Before he headed onto the track for the biggest race of his career, Kyle Larson heard Mario Andretti praise him as one of the most well-rounded drivers in all of the motorsports.

After Larson closed his 10-win season with his first Cup championship, the accolades continued, including one from his childhood hero.

Comeback complete, Larson closed his second chance in NASCAR with his first championship Sunday with a title-winning victory at Phoenix Raceway. He was suspended nearly all of last season for using a racial slur, was fired by Chip Ganassi when all sponsors dropped Larson, and it took him until the end of the year to be reinstated to NASCAR and find a car owner willing to sign him.

Stewart tried, very hard, but couldn’t get permission from the Stewart-Haas Racing partners. So it was Rick Hendrick who landed Larson, now 29 and touted since his arrival on the NASCAR scene a decade ago as the second-coming of Stewart or Jeff Gordon.

The job with Hendrick Motorsports in its flagship No. 5 Chevrolet was the opportunity for Larson to showcase all his much-hyped talent with NASCAR’s winningest team. The appreciation from motorsports legends added an extra layer of accomplishment for NASCAR’s first driver of Asian ethnicity to win a title, and the first graduate of NASCAR’s diversity program to win the Cup.

“Before the race started, I got to hear Mario Andretti talk about his thoughts on me, and now Tony Stewart,” Larson said. “If I really had a true racing hero, I would say it’s Tony Stewart. I’ve always believed him to be the best racecar driver ever. I try to model my racing and my schedule of what I feel like Tony Stewart would do, so this makes me feel really good.”

Larson was in tears after taking the checkered flag as he reflected on the 18 months since his career imploded for using a racial slur while racing online. Over that time, he’d gone from out-of-work NASCAR driver to Cup champion.

“Eighteen months ago, I didn’t even think I’d be in a Cup car again. Strapping in for the Daytona 500 didn’t even seem real, let alone winning the championship,” Larson said. “It’s definitely been a journey, a rollercoaster.”

Larson led seven times for a race-high 108 laps but was running fourth, last among the title contenders, as Joe Gibbs Racing teammates Martin Truex Jr. and Denny Hamlin controlled the championship late in a pair of Toyotas.

Then a caution reset everything.

Because he won the pole Saturday in qualifying, Larson had the first stall on pit road and the shortest sprint back onto the track of the four title contenders. He silently prayed for a flawless service call from his Hendrick Motorsports crew to get the No. 5 Chevrolet back on track ahead of his three title rivals.

Larson’s crew performed its second-fastest stop of the season—a span that stretches 38 races—and Larson went from last among the final four to first.

“That pit stop was the difference, but it wasn’t by accident. There was a lot of hard work, a lot of good people, a lot of good prep behind that that started a year, two years ago in building the process to where we have it today.”

Truex, the 2017 champion, finished second and was followed by Denny Hamlin. Hamlin is 0 for 5 in championship finales and was the only driver among the final four contenders who did not lead a lap Sunday.

Truex has finished second in the championship standings three times in the four seasons since his 2017 title.

“That’s three times we’ve been second, and that [stinks],” Truex said. “Second hurts, I’m not going to lie, especially with the car we had and the job the guys did.”

“Any time you can win 10 races in a year, you’re absolutely a deserving champion,” said the three-time Daytona 500 winner. “They did a great job on the last pit stop and got him out there, and he just set sail after that.”

Chase Elliott, the reigning champion and NASCAR’s most popular driver, led 94 laps but finished fourth. His teammate at Hendrick now reigns as champion.

“Very, very deserving champions, and glad to see Kyle have success,” Elliott said. “When you’re a good driver and a good person and you surround yourself with good people, success is warranted. It’s good to see that.”

“I never thought I was taking a risk. I know how good he is, I’m just fortunate we were able to get him, and man, what a wheelman he is,” said Hendrick. “Ten races won, 11 with the All-Star Race. It’s unbelievable.”

Larson won five of the 10 playoff races and tied Stewart, in 2011, for most wins in a single playoff season. He also broke Gordon’s 20-year record of most laps led in a single season. The 29-year-old from Elk Grove, California, joins Gordon, Kevin Harvick, and Jimmie Johnson as champions from the Golden State.

It was the 280th victory for Hendrick Motorsports, which moved past Petty Enterprises in May with Larson behind the wheel as NASCAR’s winningest team. The team has won 14 championships in 27 years.

“If you asked me did I think he could win 10 races and win the championship—I mean, I thought he’d be fast, I thought the team would be good, but I had no idea when the season started that [HMS] could win 18 races and he could win 10,” Hendrick said. “You hope that you can be competitive. You hope you can run well. We did.”