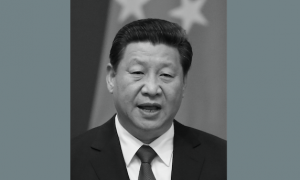 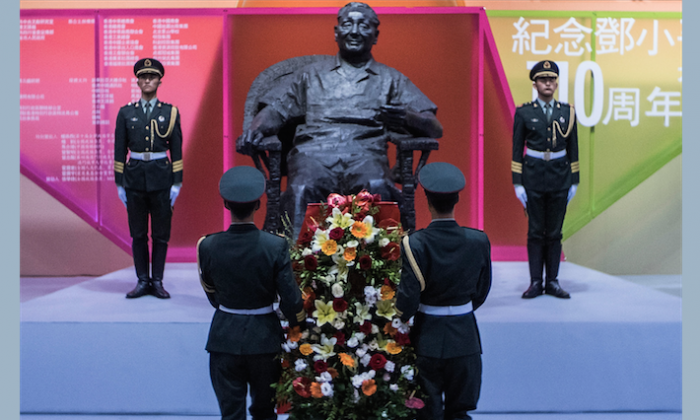 Chinese soldiers place flowers in front of a sculpture of former Chinese leader Deng Xiaoping during the Exhibition of the 110th anniversary of the birth of Deng Xiaoping on Aug. 21, in Hong Kong. This celebration is seen by some analysts as a way of hinting at current leader Xi Jinping's ambitions. (Lam Yik Fei/Getty Images)
China

Praise for Former Leader Hints at New Direction for China

In the days and weeks before the 110th anniversary of the birth of the trailblazing Chinese communist leader Deng Xiaoping on Aug. 22, the current Party leader, Xi Jinping, appears to be using the moment, and Deng’s legacy, to help bolster his own political ambitions. Xi may be dropping a hint that he also harbors far-reaching reform plans and an aspiration to leave his own mark on Chinese history.

These ideas have emerged in speeches that Xi Jinping has made about Deng’s legacy, official explications of those speeches, in a prime-time political serial about the life and times of Deng, and in what goes unsaid in all this grandstanding.

The question of absence came to the fore when comparing, for example, the marking of the anniversaries of the birthday of Deng, versus that of the leader that followed him, Jiang Zemin.

Granted that Deng’s place in Party lore differs greatly from Jiang’s, and the latter is still alive, the omission nevertheless caused Chen Pokong, an analyst of Chinese communist intrigue based in New York, to write, “This is a blow to Jiang.”

Chen’s argument, developed in a series of recent columns, essentially goes like this.

Xi Jinping has so far made a key component of his policy a major anti-corruption campaign. This campaign has been aimed at clearing out and eliminating Jiang Zemin loyalists from the military, security services, and other organs of the state.

Chen writes: “Xi Jinping’s unspoken goal is to scoop out Jiang Zemin’s power base—forcing the man himself to become a sick tiger, a dead tiger, and completely get ‘old-man politics’ out of the decision making in Xi’s administration.” The term “tiger” has become a metaphor for powerful, corrupt officials.

This tendency also reveals itself from an analysis of the ideological discussions in the Chinese communist media. Xi Jinping is heavy on both Mao Zedong, who founded the People’s Republic of China, and Deng Xiaoping, who oversaw the period of reform and reconstruction after the Cultural Revolution in the late 1970s.

The promotion of the ideologies of these two men is, according to Chen Pokong, partly a repudiation of the politics and legacies of Jiang Zemin and his mediocre successor Hu Jintao—leaders who, as Xi seems to view it, achieved little and amounted to little. Chen suggests that Xi even wishes to establish a legacy that surpasses that of Deng, though the content of that legacy is still unclear.

Xi is, however, using coded references to Deng’s thought to take a jab at Jiang. A recent article in the People’s Daily, the Communist Party mouthpiece, brought back the line: “Whoever doesn’t promote reform should step down”—a phrase initially deployed by Deng Xiaoping in the early 1990s against the bound Jiang, who had been reluctant to push forward economic reforms after the Tiananmen Square massacre of 1989.

Echoes of these sentiments—of Xi shoving aside Jiang’s legacy—can be found in the Party’s own publications, although covered in much more artifice than Chen’s analysis. A recent speech praising Xi Jinping—which appeared to some observers as the buds of a new Xi-oriented cult of worship—listed his recent achievements.

Chinese Communist Party leader Xi Jinping speaks during a press conference on Aug. 19, at the Great Hall of the People in Beijing, China. Xi appears to have recently used the legacy of Deng Xiaoping to justify his own reforms, and political purges. (How Hwee Young-Pool/Getty Images)

“Xi Jinping has instructed that China’s problems must be looked at together, not in isolation of one another,” the piece sagely advised. “Within just one year of the Third Plenary Session of the 18th Party Congress, Xi Jinping has singlehandedly abolished the labor camp system, begun a new type of urbanization, household residential system, and Party discipline inspection, and simplified the administration of power, among other changes to the judicial, financial, and cultural spheres.”

In a move that is unusual for the Party’s ideological writings, the article also quoted the overseas Chinese outlet Duowei News—long suspected of being a stalking horse for official propaganda—announcing that Xi Jinping was advancing a “Fifth Modernization” of China. This included “getting rid of the constraints of old theories” and changing “management” to “governance.”

Whatever the fine details of this argument, the dismantling of the labor camp system, if only in name, was a surprising advancement that undid what Jiang Zemin and his cronies in the security apparatus had developed over more than a decade. The labor camp system had been reinvigorated by Jiang to imprison and torture practitioners of Falun Gong, a spiritual group who he launched a persecution of in 1999.

The labor camps then became a useful tool for Zhou Yongkang, the former security boss, to pursue a comprehensive “stability maintenance” policy that cracked down on society more broadly.

Part of Deng’s legacy is the clearing out of Mao Zedong’s failed and destructive policies, of political repression and ideological mania. Xi Jinping may have something similar in mind for wiping the slate clean of the Jiang era’s violence and corruption.

Xi Jinping is using the celebration of Deng Xiaoping’s birthday to establish a sense of progress, reform, and change, while also justifying the discounting of Jiang’s legacy. Xi’s house cleaning of Jiang’s political faction may be seen in this light as ushering in a new stage of Chinese Communist history. What that might be is unclear.

“Can Xi consolidate power so as to surpass Deng Xiaoping?” Chen Pokong asked, in his recent commentary. “Deng centralized power and achieved some things: opening the doors to the world and ushering in a new period for China.

“In Xi’s centralization of power, will he also achieve things? What doors will he open? Can he begin another new period? Right now, this is the big question.”