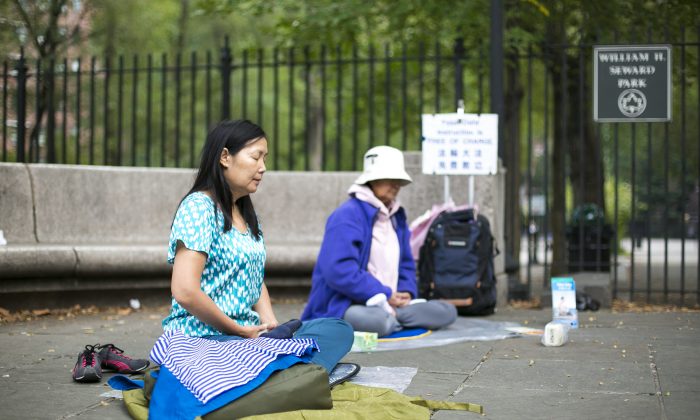 NEW YORK—It began with a few scribbles on the ground. Written in Chinese with chalk, the messages ranged from the innocuous—disease names and Chinese dish names—to the more offensive: curse words, slogans used in Communist propaganda in China, a phrase meaning “[expletive] exercise practice.”

The messages appeared at a spot on the edge of Seward Park in the Lower East Side, where a small group of people who practice a spiritual discipline banned in China, Falun Gong, regularly met in the mornings to do their taichi-like exercises. The messages started appearing with some frequency about half a year ago.

Last week, the veiled written threats turned real—the man behind the messages threatened to hit a Falun Gong practitioner during their morning exercises.

Falun Gong was banned in 1999 by the Chinese Communist regime, which launched a propaganda campaign to vilify the practice on state media. According to the Falun Dafa Information Center, the press office for Falun Gong, at any time hundreds of thousands of practitioners are detained. In detention, practitioners typically face brainwashing and torture. Tens of thousands have died from abuse, torture, and the harvesting of their organs for transplantation.

In 2008, Falun Gong practitioners in Flushing, Queens were verbally and physically assaulted by mobs, among whom were individuals later revealed to be members of local pro-Beijing Chinese associations. On a phone call recorded by an investigator, the then Chinese Consul General Peng Keyu bragged about encouraging the mobs that attacked the practitioners.

Whenever the ground was cleaned up from a rainstorm, the messages would appear, said Mun Yu Hon, 68, a Brooklyn resident who joins the practices in Seward Park every day. The practitioners begin their exercises at 6:15 a.m., and the messages would be there by the time they arrive.

“The writings were messy and made it seem like we didn’t have dignity,” said Lily Hung, 42, who chose not to use her real name for fear of retaliation. She said one time, there were drawn figures that showed the practitioners’ exercise movements. Hung attends the practices several times a month and is a Chinatown resident.

The practitioners had a hunch who the culprit was, but not until last Tuesday afternoon did Hon, while walking past the park on a shopping trip, witness the suspect in action. It was a Chinese man in his 50s or 60s, who regularly plays his bamboo flute at a spot near where the practitioners practice.

“The flute playing wasn’t a problem. We didn’t have any conflicts until last week,” Hon said, speaking in Cantonese. She said the practitioners never confronted him before, and did not report the writings to any authorities. “Because we just want to keep doing the exercises,” she said.

After Hon told a fellow practitioner at Seward Park, Queens resident Elena Chung, 63, about identifying the man, Chung approached him the next day during morning exercises and asked if he was the one writing the messages. The man admitted to it, and then proceeded to yell obscenities at Chung.

“That got him really angry,” said Chung in Cantonese. Other practitioners at the exercise site also witnessed the scene.

The following day, when eight practitioners were doing the morning exercises, the man appeared with another younger, Chinese man, who began snapping photos of the practitioners with his phone.

Chung noticed the man and asked him to stop taking photos. When Chung asked why he was taking them, he responded in Cantonese, “‘So I can bring the photos to Chinese authorities, and then you guys will get screwed if you return to China,'” Chung recalled.

The practitioners asked the man to stop taking pictures, but he continued. Hoping to report him to police for continually harassing them, Hung took out her phone to take a photo of the man.

Both men then demanded that Hung give them her phone and delete the photo, yelling and cursing. “I felt threatened, and a little scared,” Hung said in a subsequent interview on Tuesday.

When Hung refused, she was sitting on the ground doing the meditation along with others. Chung saw the older man stand behind Hung and begin swinging his flute toward her head.

Fearing for Hung’s safety, Chung dialed 911, and the man snapping photos fled the scene. About 15 minutes later, two police officers arrived and handcuffed the older man with the flute, and escorted him to the police car.

The police said no arrest was made. The practitioners saw the older man at the park the following day.

Hung filed a complaint for harassment with the 7th precinct on Sept. 19. She also reached out to local elected officials and the parks department, describing the incident. She said she is seeking their advice, “on how we can protect our rights and safety.”

“This is a hate crime,” Hung said. “I want to expose them so we don’t have to live in fear anymore.” She plans on reporting the incident to the police department’s Hate Crimes Task Force.

On Tuesday evening, Hung and other Chinatown Falun Gong practitioners attended the local Community Board Three board meeting at P.S. 20 to let fellow residents know about what had happened.

“We want to have a free environment to practice in the park,” Chinatown practitioner Cactus Lo told the meeting attendees during the public comment portion of the meeting.

“It’s damaging the community, and bringing insecurity to people who live here,” Hung said in an interview.

Community board chair Gigi Li agreed. “This should not be tolerated,” she said after the meeting. “Any kind of this behavior, as a community, we definitely want to know about it.” She said the board is willing to help Hung, should she reach out to them.

CORRECTION: A previous version of this article wrongly stated the date when Hung filed a complaint with the police department. The correct date of the filing is Sept. 19, 2014. Epoch Times regrets the error.