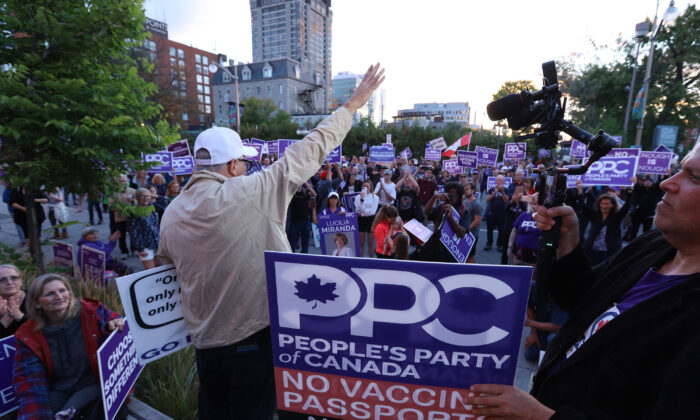 The People’s Party of Canada has removed a party member due to allegations he threw gravel at Liberal Party Leader Justin Trudeau at a campaign stop in London, Ont., on Sept. 6.

Shane Marshall, the president of the Elgin-Middlesex-London riding association, has been relieved of his position, PPC spokesperson Martin Masse confirmed in an email to The Epoch Times.

“We have determined that he was involved after seeing evidence on social media and talking to witnesses,” Masse wrote.

Trudeau was boarding his campaign bus to leave an event in London, Ont., on Sept. 6 when gravel and debris were thrown at him. The RCMP security detail tried to shield Trudeau. He later said at a press conference that he was unhurt, while saying it is “absolutely unacceptable” for people to be endangering others at a political rally.

“Some idiot threw pebbles at Mr. Trudeau yesterday. I condemn it. Words are our weapons. But physical violence is ALWAYS wrong,” he wrote.

The PPC has been gaining recently in the polls, with polls showing the party surpassing the Green Party, prompting Bernier to say he should have been part of the leaders’ debates this week.

He was denied participation by the federal Leaders’ Debates Commission because the PPC didn’t meet the criteria required by the commission.