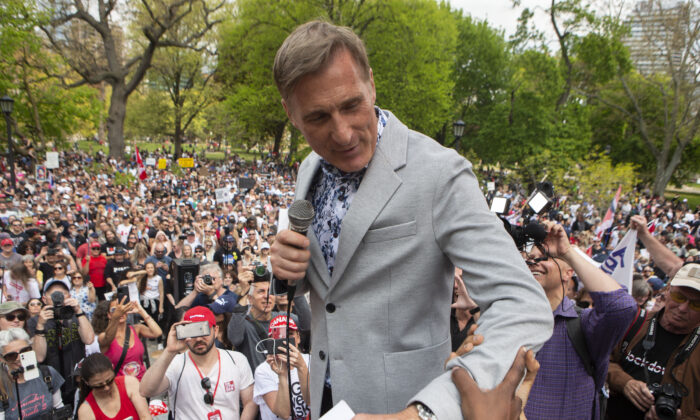 Maxime Bernier, Leader of the People's Party of Canada prepares to speak to the crowd as protesters demonstrate against measures taken by government and public health authorities to curb the spread of COVID-19, in Toronto on May 15, 2021. (The Canadian Press/Chris Young)
Canada

People’s Party founder and leader Maxime Bernier says he’s considering running in a Western riding for the next federal election.

While in Regina on a current Western tour, Bernier told the Epoch Times he is “60 percent” likely to run elsewhere next time.

“I think it would be time to look at another riding. And I will have to move there with my family. We’ll look at it,” Bernier said in an interview.

“We have great ridings in northern Ontario, in Alberta, in southern Manitoba, in interior BC where our candidate did very well. And so yes, I’m looking at all the opportunities for me as a leader.”

Bernier’s father Gilles was a Beauce MP from 1984 until 1997, first as a Progressive Conservative, and later as an Independent. Despite this pedigree, the younger Bernier believes his views are a better match for the West.

“In Eastern Canada, they call me the Albertan from Quebec because we share the same values. And that’s why I also am looking at in a couple of ridings out west where I can run. I believe that it’s not a challenge for me as a francophone to run in Alberta,” Bernier said.

The strategy worked well for former Green Party Leader Elizabeth May. She failed to win her home riding of Central Nova in 2008 despite an agreement by then-Liberal leader Stephane Dion not to run a candidate there. In 2011, May ran in B.C.’s Green-friendly Saanich-Gulf Islands. She toppled Conservative cabinet minister Gary Lunn and has represented the riding ever since.

However, it didn’t work well for former Ontario Conservative MP Derek Sloan who ran in the Alberta riding of Banff-Airdrie in the 2021 federal election, coming in fifth in the contest.

“What we are doing, it’s a kind of a common sense revolution. And that is taking time, and we understand that … And I believe that the next election, we’ll have a couple of candidates elected,” he said.

Bernier said his party is “doing politics differently” by maintaining a consistent message regardless of its popularity.

“There’s no taboo subjects for us. Abortion is important. And when you have late-term abortion in this country, for me, it’s murder. We must be able to have that discussion,” Bernier said.

“We believe that we must speak about our convictions openly with passion and conviction, and we’ll be able to have more support—popular or not. It was not popular to speak about freedom two years ago. But now, it’s more popular.”

Bernier says recent sociopolitical shifts in the country have brought other issues to the fore.

“Euthanasia is going too far right now… When you have somebody that is sick and you have the healthcare workers that are telling the person, ‘There’s another option, you can die and we can kill you if you want.’ No, that’s not our country. Hitler was doing that in Germany.”

Bernier, a former foreign affairs minister, also sees emerging issues on the international front. He says Canadians “need to fight for our sovereignty as a country” amidst globalist intrusions. He also believes Canada shouldn’t help Ukraine’s military efforts against the Russian invasion.

“We must fight for peace and prosperity, we must be the first country that will seek for a diplomatic solution there,” Bernier said.

“It’s not our war. And I’m not pro-Putin; I’m not pro-Ukraine. But the federal government the last five months spent $3 billion for Ukraine. We are broke, we don’t have any money to fight a fight that is not our fight. ”