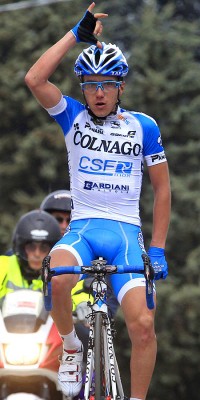 Colnago’s Domenico Pozzovivo showed he still has the kind of climbing legs which won him two stages and the General Classification win in April’s Giro del Trentino—Pozzovivo attacked on the steepest section of the final Cat 2 Colle Molella and rode away with Stage Eight of the Giro d’Italia.

Not only did the diminutive Italian climb well, he held his lead over the flat final four kilometers, holding his gap over pursuer Benat Intxuasti of Movistar and the rest of the peloton, led by Liquigas. The Colnago climber announced that he might be a GC or stage-winning threat in the mountainous final week of the Giro.

Race leader Ryder Hesjedal of Garmin-Barracuda held onto the pink jersey despite looking uncomfortable on the climb. His lead was cut to nine seconds by Katusha’s Joaquin Rodriguez, who took third and an eight-second bonus.

A group of four riders attacked 3o kilometers into the 229-km stage. Andrey Amador of Movistar, Julien Berard of Ag2R, Tomasz Marczynski of Vacansoliel, and Miguel Minguez of Euskaltel were doomed from the start because Amador was only 1:16 down in the General Classification; none of the favorites’ teams were going to let him stay away.

Amador and Marczynski attacked the break 50 km from the finish, and stayed away until 16 km from the end. Liquigas led the chase, turning the speed up high to wear out the peloton on the road up to the final climb.

They hit the climb in force, with three riders ahead of leader Ivan Basso; Astana led onto the climb with five riders protecting their leader Roman Kreuziger.

Liquigas took over the lead as the climb progressed, with Sylvester Szmyd at the head. Szmyd kept the pace high to discourage attacks, but not high enough to discourage Pozzovivo. No one responded to his attack; the Colnago rider was apparently not considered a real threat, and none of the top GC contenders wanted to burn out themselves and their teams after such a long stage, early in the race.

Intxausti let the Colnago rider get a kilometer free before launching his chase; he was never able to get closer than 22 seconds, but that was enough to earn the Movistar rider fifth in GC.

Stage Nine is almost tiny by the standards set by the Giro so far—at only 166 km from San Giorgio nel Sannio to Frosinone, it shortest road stage by far. The route is flat, with nothing to hinder the sprinters, though the final kilometer slopes up slightly.