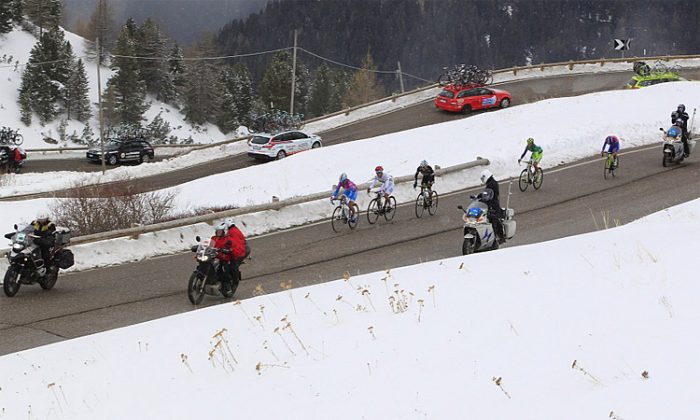 Domenico Pozzovivo of Colnago showed he can handle power climbs as well as steep climbs, winning the Giro del Trentino with a third-place finish in Stage Four.

The diminutive Italian showed he could ride power climbs as well as the super-steep ascents, as he rode easily in the front group up the Cat 1 Passo Pordoi, then dropped the favorites in the final kilometer. He was not bothered by the long, medium-grade climb, the cold, the snow or the altitude; he never looked stressed, no matter the pace.

“When I think back to the cold we suffered today – I am still shivering,” Pozzovivo told cyclingnews.com.

“I found the right rhythm and a rising determination as the Tour progressed. It was important to do well as a team as the Giro d’Italia is coming up very soon and we were immediately comfortable with the team time trial on the opening day.

“My teammates have been busy all day to keep the race closed for me. Lots of riders tried to attack me and it was not always easy to answer. But I never had moments of great crisis and in the end I felt so good that I was also able to attack in the finale.”

Pozzovivo had the reputation for being a super-steep specialist, best on the climbs with double-figure gradients, but not strong enough to match the bigger men on the long power climbs. Lampre’s Damiano Cunego and Liquigas’s Sylvester Szmyd, third and second in the General Classification, were favored for the final stage.

Liquigas set a huge pace on the final climb, hoping Pozzovivo wouldn’t have the strength to stay with them. However, the tiny Italian climber handled the pace with ease.

A crash on the early slopes of the climb split the peloton, and the pace set by Liquigas riders Ivan Basso and Eros Capecchi did the rest; a group of 18, then 12 riders clung to the leading Liquigas riders while the rest dropped back.

Two breakaway riders, Brian Vanborg of Spidertech and Reto Hollenstein of Netapp were caught a third of the way up the final climb.

Right after they were caught, Androni Giocattoli’s José Rujano made a strong attack, held a gap of ten bike-lengths for a few minutes, and was caught. He immediately dropped off the back, unable to match the pace set by Liquigas. Rujano, fourth in the General Classification, was the first of the overall contenders to crack under the pressure from Liquigas.

Astana’s Roman Kreuziger, fifth in the GC, was the next to go, as Capecchi took over from Basso and kept the pace high.

Halfway up the final climb Capecchi was done, and the final seven-man group was left to fight for the win.

Dupont, tenth in GC, decided to take a flyer. Pozzovivo didn’t react; he just kept riding quickly and easily and eventually rode down the AG2R rider. Spent, Dupont slipped off the back, with Serpa who was also worn out.

The final five riders stayed together until the final kilometer when Pozzovivo, still pedaling easily, picked up his pace and dropped Szmyd and Cunego. Colobians Carlos Betancur and Darwin Atapuma, used to the high altitude, were able to match the Italian.

Pozzovivo, Betancur, and Atapuma left the rest to settle the podium among themselves. Atapuma attacked 150 meters from the end; Betancur responded, but weakly. Pozzovivo just kept riding, satisfied with third in the stage.

Szmyd led Cunego across the line; since the pair finished together, the Lampre rider took second in GC, the Liquigas man, third. Betancur moved from sixth to fourth, Rujano from seventh to fifth. Roman Kreuziger dropped from fourth to sixth.