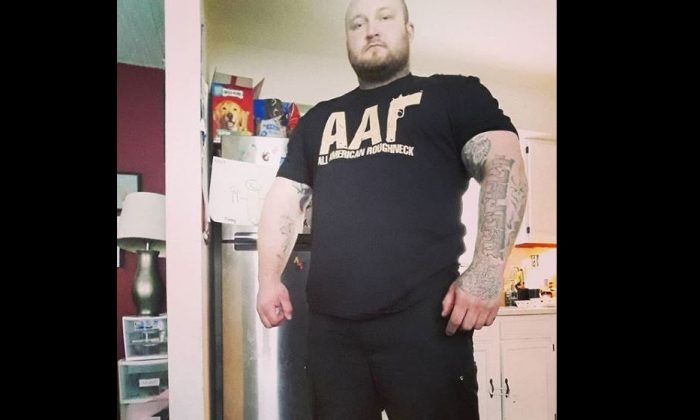 Ryan Belcher, 29, in a file photo. (iam1him/Instagram)
US News

A powerlifter who heard a car crash and rushed outside lifted part of an SUV off of a man who was pinned underneath, freeing the victim.

Ryan Belcher, 29, said that he was working on Feb. 14 when he heard a loud crash and rushed over to see what happened.

As he got closer he saw a Jeep Cherokee flipped upside down and heard a man underneath the vehicle calling for help.

“When I first approached the vehicle, there was a good four men there, and they were all trying to move this vehicle and I seen it wasn’t happening and I figured what a better time now to use what I know I can actually do,” Belcher told Fox News.

Belcher is 350 pounds and can squat 950 pounds and deadlift another 800 pounds. He said he saw he could get some leverage and lift the 2-ton vehicle off the man.

“Half of his torso was outside of the vehicle and the other half was still underneath in the vehicle. I had no other choice. It was either save a man or not believe in myself. So I just reached in did what I had to do,” Belcher told WXYZ.

“I just jumped right in. I seen a window that was broken out of the back of the vehicle and I knew if I can swing the vehicle in a certain direction I can free him from that pole,” Belcher added to Fox.

“So, I just stuck my arms in and I don’t know I just grabbed it, lifted it up and started pushing and all I heard was that’s enough we can get him.”

On Instagram, Belcher said that it was “a crazy day.”

“I grabbed the back of the jeep lifted as much as I could and started pushing until I heard that’s enough! I’m humbled to be as strong as I am, I’m thankful for the ability I’ve been Given!” he added.

Belcher said the man was freed and rushed to the hospital along with a woman who was involved in the accident.

He met with the man and the man’s family over the weekend. They thanked him for his heroic effort.

“I like being called the Hulk, my son’s favorite is the Hulk and he always says my daddy is the Hulk. To say I’m a hero, I don’t know. I’m glad to have been there and I was put there for a reason,” Belcher told WYXZ.

“If I could describe it in one word, It would be humbled,” Belcher told MLive about his feelings a day after the rescue. “This could have been anybody, it could have been me. And just getting home to my children after that is all I thought about.”

He added, “I’d hope if it was me in there, somebody would help me the way I did them.”