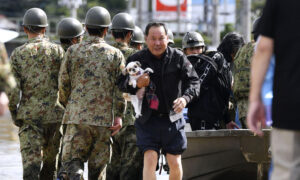 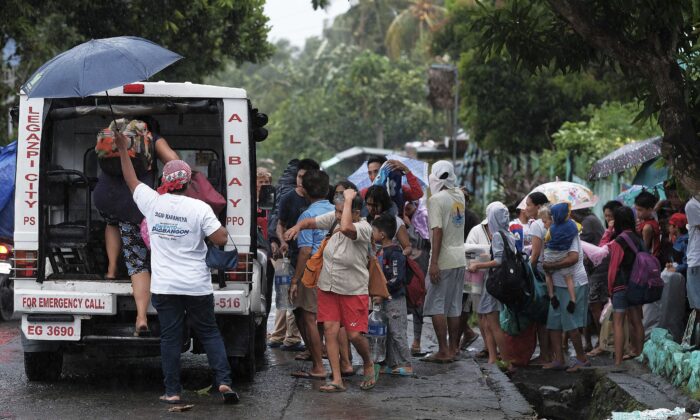 Residents evacuate their area in preparation for the coming of Typhoon Kammuri in Legazpi, Albay province, southeast of Manila, Philippines on Dec. 2, 2109. (AP)
Asia & Pacific

MANILA, Philippines—A powerful typhoon drew closer to the Philippines on Dec. 2, forcing tens of thousands of villagers to flee to safety, knocking out power in entire provinces and prompting authorities to plan the closure of Manila’s international airport.

Typhoon Kammuri was forecast to slam into the country’s eastern coast late Dec. 2 to early Dec. 3 with maximum sustained winds of 155 kilometers (96 miles) per hour and gusts of up to 190 kph (118 mph), government forecasters said. In Albay, Sorsogon and Catanduanes provinces, where the typhoon is expected to blow ashore, pounding rain and wind started to rattle tin roofs and block visibility by nightfall.

The typhoon hits as the Philippines is hosting thousands of athletes from Southeast Asia for biennial regional games that opened on Saturday. Organizers said windsurfing competitions have been postponed and other events would be delayed if needed for safety but there was no plan to extend the 11-day games.

Officials warned of storm surges of up to 3 meters (nearly 10 feet), prompting the early evacuations of nearly 90,000 villagers from coastal communities and low-lying areas prone to flash floods and landslides, according to the Office of Civil Defense.

“We’re aiming for zero casualties and we can attain that with pre-emptive evacuations,” said Ricardo Jalad, who heads the government’s disaster response agency.

The typhoon is expected to blow near the Manila metropolis at midday Dec. 3, prompting officials to announce the planned closure of Manila’s airport from 11 a.m. to 11 p.m. Dozens of flights were canceled or diverted and schools in affected provinces were closed.

About 20 typhoons and storms batter the Philippines each year. The archipelago of more than 100 million people also lies in the so-called Pacific “Ring of Fire,” a seismically active region where earthquakes and volcanic eruptions are common, making the Philippines one of the world’s most disaster-prone countries.