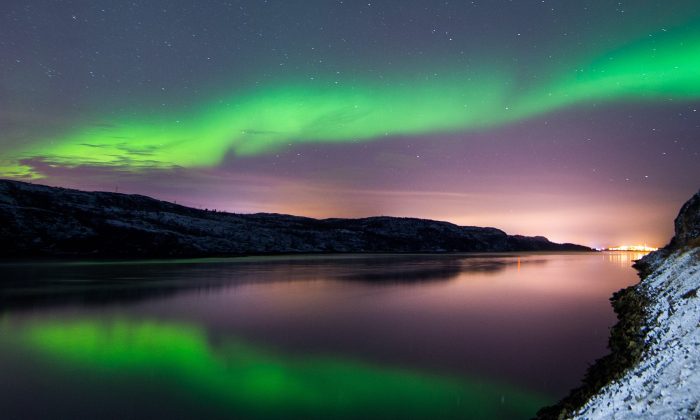 The Aurora Borealis or Northern Lights illuminate the night sky near the town of Kirkenes in northern Norway on Nov. 12, 2015. (Jonathan Nackstrand/Getty Images)
Science

'If it turns out to be stronger than that, it could be seen'
By Epoch Newsroom

A solar storm is slated to hit Earth on Thursday, New Year’s Eve, and will allow people to see the Aurora Borealis.

The National Oceanic and Atmospheric Administration’s Space Weather Prediction Center said the storm might allow people as far down as Illinois or Oregon to see the Northern Lights in the night sky. Some people posted photos of the Northern Lights on Twitter.

Solar storms are classified on a scale of one to five, with five being the strongest. The storm slated to hit Earth over the coming days is ranked as a G3, which means it could cause disruptions to power grids and radio blackouts.

The Northern Lights could dip down as far as San Francisco, one expert said.

“It’s certainly possible,” Terry Onsager, who is a a physicist with the National Oceanic and Atmospheric Administration told the San Francisco Chronicle. “It depends entirely on the strength of the storm. If it turns out to be stronger than that, it could be seen.”

On Monday, a powerful M1.9 class solar flare, or coronal mass ejection, erupted from the Sun, sending out charged particles throughout the solar system. When the particles make their way to Earth, it can create storms above our planet.

New Year’s Day will now see a minor G1 storm, according to an NOAA update on Thursday.