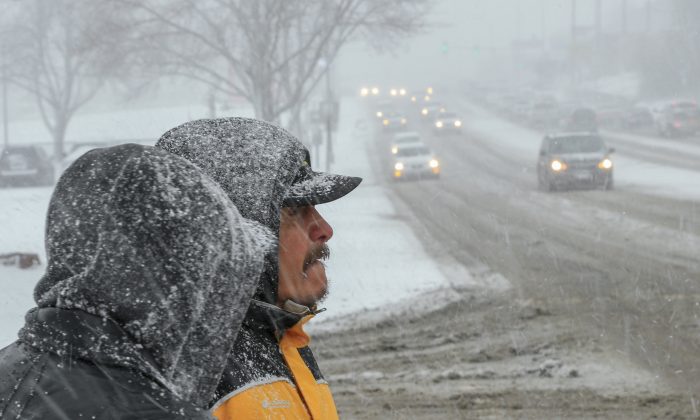 Two men walk in the snow in downtown Sioux Falls, S.D., Wednesday, March 23, 2016. A powerful spring blizzard stranded travelers at Denver's airport and shut down hundreds of miles of highway in Colorado, Wyoming and Nebraska as it spread into the Midwest on Wednesday. (AP Photo/Nati Harnik)
US

Denver International Airport was closed around midday Wednesday because wind-whipped snow made it unsafe for planes to land or take off. The airport reopened about seven hours later, but more than 1,300 of Wednesday’s 1,500 scheduled flights were canceled.

Hundreds of people with suitcases and duffel bags stood or lay around the terminals, and airport employees handed out blankets and sleeping mats to people who were still stranded Wednesday night.

Alicia Bailey was headed back to Atlanta after a business trip in Colorado Springs. She had a treacherous, white-knuckle, four-hour drive to the airport only to learn her flight was delayed several times and then finally canceled.

“I had a nice little cocktail, and that calmed the nerves down because I was frazzled,” she said. “The way I look at it is, it’s all God’s work. You have to look at the glass half full. I can’t change it so I’m just going to tell my boss, ‘I’ll see you on Friday.'”

Airport spokesman Heath Montgomery said the airport, which was last closed by a blizzard in 2006, will be fully operational by Thursday morning.

The storm, which is moving to the northeast across the Plains and into Michigan, was bringing strong wind gusts to southeast South Dakota, creating hazardous driving conditions and reducing visibility to a quarter of a mile in some areas Wednesday evening.

Forecasters with the National Weather Service said snow accumulations in South Dakota ranged from fewer than 2 inches in Sioux Falls to up to 7 inches north of Humboldt, while gusts reached between 40 mph to 45 mph.

“It’s pretty common that we see a couple of big storms in March, certainly not unheard of in this neck of the woods, but it is a high amount,” said weather service meteorologist Kerry Hanko.

The fast-moving storm had already moved into Minnesota by Wednesday evening, dropping up to a foot of snow and setting the stage for a treacherous commute in parts of the Minneapolis-St. Paul area.

The State Patrol is advising drivers in south-central Minnesota to stay at home because of expected heavy snow and blustery winds.

Meanwhile, in neighboring Wisconsin, Gov. Scott Walker declared a state of emergency as the storm approached his state.

Walker called members of the Wisconsin National Guard to active duty to help local authorities as necessary, and forecasters say up to a foot of snow could bury central Wisconsin from River Falls to the Green Bay area.

Earlier, in Colorado and Wyoming, the wind and the heavy, wet snow typical for a spring storm weighed down power lines and snapped them into one another, causing outages and flickering lights.

The storm mainly hit the eastern, flat halves of those states and shut down long stretches of highways before moving east.

Even politics had to take a snow day in Wyoming as Democratic presidential candidate Bernie Sanders and former President Bill Clinton both canceled planned campaign events in the state.