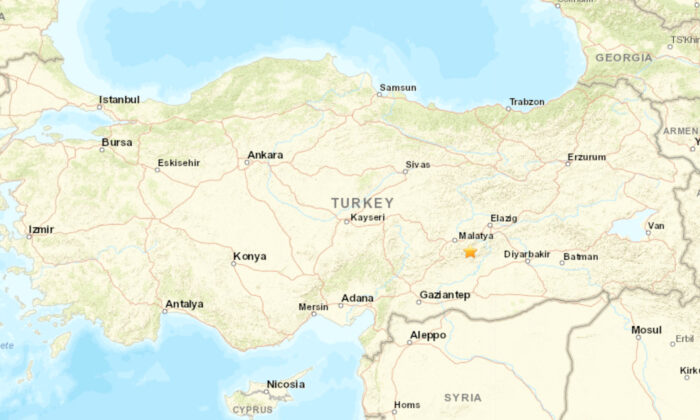 A map showing the location of a 5.2 magnitude earthquake, which struck the town of Puturge in Malatya province, Turkey, on April 9, 2022. (USGS/Screenshot via The Epoch Times)
Middle East

The 5.2 magnitude quake struck the town of Puturge in Malatya province at 5:02 p.m. local time (1402 GMT), Turkey’s Disaster and Emergency Management Directorate (AFAD) said. The tremor was recorded at a depth of 6.7 kilometers (4.2 miles).

“We have not received any negative reports so far. Our teams continue their scanning activities in the field,” Malatya Governor Aydin Barus told the state-run Anadolu Agency.

Environment and Urbanization Minister Murat Kurum tweeted that the Turkish government was closely following the situation.

Turkey sits on top of major fault lines and earthquakes are frequent.

A 6.7 magnitude earthquake hit neighboring Elazig province in January 2020, killing 41 people and injuring more than 1,600. In 1999, at least 17,000 people died in a powerful earthquake in northwest Turkey.