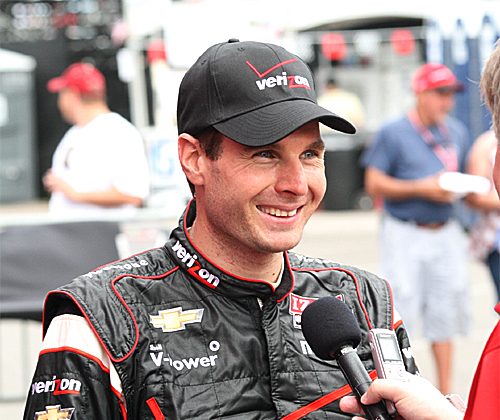 ST. PETERSBURG, Fla.—Will Power started his 2012 IndyCar season with a record-setting fast lap around St. Pete’s concrete-lined street course, completing the 1.8-mile circuit in 1:01.3721. This is the third year in a row the Penske driver will start from the pole.

“I was actually surprised at the lap times on used tires,” Power told the post-qualifying press conference.

(Most teams use one set of their soft, sticky Red tires to get into the final qualifying round, and use a “scuffed” (lightly used) set in the final round. Teams know they will qualify no worse than sixth, and can save the final set of new Red tires for the race.)

“The Chevrolet is obviously the strongest engine,” Power continued. “We made a couple adjustments for the Fast Six and the car was really good. I was able to get the pole.”

The record is an IndyCar record only. Sébastien Bourdais qualified with a lap of 1:00.928 during a ChampCar race in 2003.

Ryan Briscoe will start next to his Penske teammate on Sunday; the Penske pair swept the front row. If teammate Helio Castroneves had not damaged his car in the second round of qualifying he might have given the team a three-car sweep.

Ryan Briscoe explained that sweeping the front row wasn’t as easy as it looked. “Not the smoothest of runs at Team Penske today with Helio’s crew having to fix the suspension, and I had battery voltage go low, had to come in and change the battery. We were lucky to get out there in the Fast Six and make the laps we did.”

The second row will be all Andretti Autosport: Ryan Hunter-Reay and James Hinchcliffe.

“It’s a pretty good result for us,” Hichcliffe said. “The goal was to get into the Fast Six. If you told us we would have made that, I would have been pretty happy. It’s a great effort by Andretti Autosport. To have Ryan and I taking over the second row, it’s great.”

Fans hoped the new car would improve competition, and possibly it has: four-tenths of a second cover the first four qualifiers.

That doesn’t necessarily reflect what will happen in the race. A journalist asked if the teams had had a chance to test the new chassis in traffic at racing speed. “Tomorrow is going to be the biggest test we have had all year,” Hinchcliffe replied.

Helio Castroneves qualified fifth after his team changed the entire rear suspension. He said his radio wasn’t working during Q2, so he didn’t know if he was ahead or behind.

Not taking a chance of getting dropped, he pushed as hard as he could, and “unfortunately I went over the limit of the car and ended up hitting Turn Nine,” he explained.

“The guys became fully focused on fixing the rear suspension. In seven minutes they were able to switch the entire suspension and we were able to get back out there. I didn’t have much, but certainly I’m happy for Team Penske having three cars in the top five, and Chevy as well.”

Simon Pagenaud of Schmidt-Hamilton rounded out the Firestone Fast Six, but will start 16th; because he changed engines in Friday’s practice, he was penalized ten grid positions.

“I love street circuits,” he said. “It is very intense and gets you an adrenaline rush. You’re that close to the wall, and sometimes you brush it. I love it.

“You really need to feel as one with your car and you need to work really hard with your engineer to get everything you need out of it.”

James Hinchcliffe opined that the Chevy engine wasn’t necessarily better. “It’s more than the engine that gets the car around,” he commented.

His teammate Ryan Hunter-Reay agreed. “I don’t think it is just horsepower at all. Really it comes down to how you put power down out of the corner, and all the way through the gears. I think horsepower is probably last on the list.”

The Target-Ganassi teammates, Scott Dixon and four-time and defending champion Dario Franchitti, failed to make the final round of qualifying. They will start six and ninth.

The Izod IndyCar Honda Grand Prix of St. Petersburg starts at 12:30 ET. Tickets are available at the box office or online at http://www.gpstpete.com.