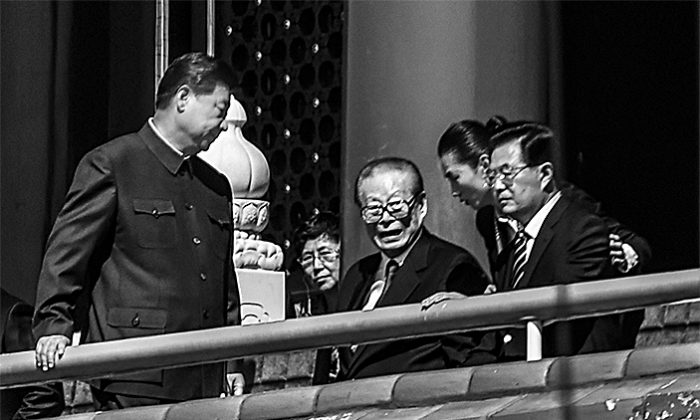 Amid Xi Jinping’s recent anti-corruption campaign that targets China’s political and legal system, many officials who were recently taken down were part of the “610 Office.”

The 610 Office is a Gestapo-like organization that was established by the Chinese Communist Party (CCP) under former leader Jiang Zemin on June 10, 1999—hence its name—formally known as the “Central Leading Group on Preventing and Dealing with Heretical Religions.”

It was established for the sole purpose of carrying out the persecution of Falun Gong, a spiritual meditation practice based on the principles of truthfulness, compassion, and forbearance. The practice became enormously popular—with roughly 100 million adherents in China by 1999, according to official estimates. Threatened by this number, which was greater than the number of Party members, Jiang ordered the brutal suppression of Falun Gong practitioners.

The 610 Office was rarely seen in government reports, and it had been the most secretive organization within the CCP until 2013, when it was first exposed to the public.

Xi initiated the anti-corruption campaign after he took office in 2012. Most of the purged officials were part of Jiang’s political faction.

When Li Dongsheng was removed from his post as deputy minister of public security in December 2013, Beijing also disclosed that he was the 610 Office director at the time.

The announcement is noteworthy because it was the first time the CCP publicly confirmed the existence of the 610 Office.

Since then, the public came to see more 610 officials taken down from their posts. Su Rong, former vice-chairman of the CCP’s Political Consultative Conference and former head of the Jilin provincial 610 Office, was investigated in 2014 and sentenced to life in prison. Zhou Yongkang, former secretary of the Central Political and Legal Affairs Commission and former head of the central 610 Office (2007–2012), was convicted of various crimes in 2015 and received a life sentence.

This year marks the end of Xi’s second term, and he has not let up on his efforts of “cleaning out” the CCP’s political and legal system. As Xi seeks re-election next year, he wants to make sure that his political rivals don’t get in his way in the lead up to the 20th National Congress.

During the first half of this year, the CCP’s top disciplinary body disclosed at least four purged officials who have held positions in the 610 Office.

In 2018, Xi dissolved the central 610 Office. It was then incorporated into the Ministry of Public Security and Political and Legal Affairs Committee (PLAC).

However, the 610 Office has never had a legal basis for its existence as it has no approval from the CCP’s rubber-stamp legislature (the National People’s Congress), nor from the Politburo, the CCP’s top main decision-making body.

“No legislation was passed establishing it [and] no provisions formally outlined its mandate,” Sarah Cook, senior China research analyst at U.S.-based NGO Freedom House, told The Epoch Times in a 2020 report.

“The real reason [of Xi’s order to dissolve the 610 office] is probably because of their [610 officials] power. It’s not because they are corrupt, but because after having this power, they do not listen to Xi,” China current affairs commentator Heng He told the Chinese-language edition of The Epoch Times.

The CCP’s public security, judicial, and legal systems have power, guns, and money. Their loyalty is of top concern to Xi.

According to a report from Freedom House, “The estimated annual budget for all 6-10 Office branches nationwide is 879 million yuan [approx. US$135 million].”

On top of that, several major business owners have ties to Xi’s political rivals, including Jack Ma, founder and former CEO of e-commerce giant Alibaba, and Xu Jiayin, founder of the deeply indebted property giant Evergrande.

At a meeting in January with the CCP’s disciplinary body, Xi alluded that he would take down “double-faced” officials, and warned that corruption took hold of the political and business circles, which “threaten the political security of the Party and the state.”

In spite of the incorporation with the PLAC, the 610 Office is still an independent organization and exists in a more secretive manner within the CCP’s political and legal system, according to Heng.

The 610 Office that was supposedly dismantled has once again attracted attention as a result of the latest round of purging of high-level officials.

According to the CCP’s official announcements, Fu Zhenghua and other high-ranking officials have used their power in the political and legal system to form interest groups or political factions, whose main goal is to plot against a larger target.

Some observers would ask the following: Since Zhou Yongkang, the former czar of the 610 office, has been purged a few years ago, then who were these purged officials listening to? And what were they after?

DuoWei News, a Beijing-based propaganda outlet targeting overseas Chinese, published an article on Oct. 15, claiming that the 610 Office was established during a special Politburo meeting convened by Jiang Zemin on June 7, 1999.

The article said that since the establishment of the 610 Office, the three Chinese premiers—Zhu Rongji, Wen Jiabao, and Li Keqiang—have not signed the appointment and the dismissal orders of the directors and deputy directors. One reason is that the 610 Office directly handled the persecution of Falun Gong, which is considered a “sensitive” issue. In addition, there is no official document that stipulates the duties and responsibilities of the 610 Office, which reports directly to the standing committee of the CCP’s Politburo, according to DuoWei News.

Falun Gong has been persecuted for 22 years, and has been the international focus of human rights abuses in China.

The U.S. Department of State announced on May 12 sanctions against Yu Hui, former director of the 610 Office in Chengdu, Sichuan Province, for his role in persecuting Falun Gong. Yu and his immediate family members are banned from entry into the United States.

The 610 Office has been recognized by the global community for its role in carrying out the CCP’s notorious human rights abuses. Some experts outside of China see Xi’s anti-corruption measure against these 610 officials as a sign of his intention to cut off ties with the persecution apparatus.

Aside from its role in persecuting Falun Gong, the 610 Office is an extralegal institution that uses its power and resources to collect intelligence for Jiang’s faction to attack political opponents and to plot a coup d’état.

Therefore, the recent purging of 610 officers reflects the fierce power struggle that has intensified among high-level CCP officials, as Xi seeks to secure his leadership.