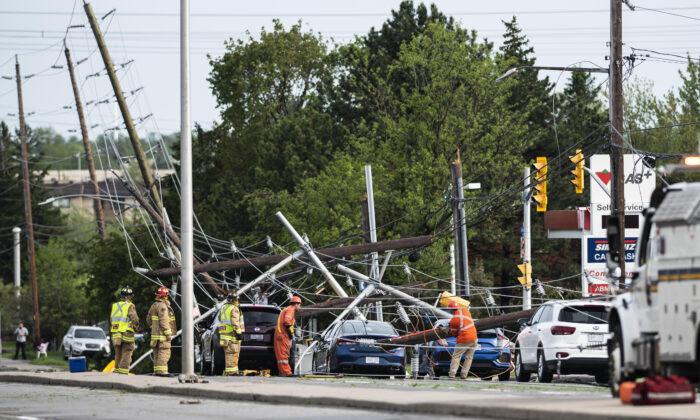 Firefighters and utility workers work among downed power lines, poles, and traffic lights that came down onto the roadway and onto motorists during a major storm, on Merivale Road in Ottawa, on May 21, 2022. (Justin Tang/The Canadian Press)
Canada

Emergency crews continue to work around the clock to restore power and clear roads after a massive thunderstorm swept across southern Ontario and Quebec Saturday, killing at least eight people and leaving hundreds of thousands of residents without power. Officials had said it could take days to resolve the outages.

Speaking at a virtual news conference late Sunday afternoon, Ottawa Mayor Jim Watson said the impact of the storm has affected every corner of his city.

“This has been a very, very difficult 24-hour period,” Watson said. “We don’t have clear sight as to when everyone will get their power back. We anticipate it will be sometime in the next three to four days.”

The storm whipped through Ontario and Quebec in a matter of hours, breaking hydro poles and toppling towers, uprooting trees, and ripping shingles and siding off houses.

Environment Canada, which issued a mobile alert warning of the severe thunderstorms, said wind gusts of 132 kilometres per hour were measured at the peak in some parts.

Police in Ontario reported seven people killed by falling trees in locations across the province during the storm Saturday, and an eighth killed by a falling tree branch in the storm’s aftermath on Sunday.

A ninth person died Saturday when the boat she was in capsized on the Ottawa River near Masson-Angers, Quebec.

Joseph Muglia, director of system operations and grid automation at Hydro Ottawa, said more than 200 hydro poles were damaged beyond repair, many snapped in half by the force of the winds.

“The damage assessment is still underway. We’ve done a good chunk of it now, but still quite a bit of it to go, as far as full damage assessment of all the areas involved,” he told reporters, reported CTV News on May 22.

In a tweet Monday morning, Hydro Ottawa said it has restored power to just over 70,000 customers.

“The level of damage to our distribution system is simply beyond comprehension. We’re managing this from a whole of city perspective given that no single area of the City is unaffected in some manner,” it said.

In many cases, the restoration efforts will be lengthy as crews deal with downed trees, damaged hydro poles and other obstacles on a house-by-house basis across the city. Info will be shared as it becomes available. pic.twitter.com/QoLcv5AA5d

The hydro company added in a news release Monday that the thunderstorm is “significantly worse than both the Ice Storm of 1998 and the tornadoes of 2018.”

“An estimated 110,000 customers remain without power,” the company said. “Given the number of separate events and the extent of damage to electrical equipment, this will be a multi-day restoration effort.”

Hydro Ottawa stressed that power restoration will be prioritized to critical institutions and emergency services, followed by large neighbourhoods with the largest number of customers affected, before heading to smaller areas.

Hydro One, Ontario’s largest electricity provider, also issued a release Sunday, saying its crews had restored power to 360,000 customers, though 226,000 remain without power.

“In the Ottawa area, four transmission towers were toppled by the storm and Hydro One crews are building a temporary by-pass to restore power,” the release said.

UPDATE: Here’s another look at the destruction caused by the #ONstorm in #Uxbridge and #Ottawa. In the Ottawa area, crews are building a temporary by-pass to bring power back. We have all hands on deck, with every available crew and neighbouring utility here to help. pic.twitter.com/NLcPU5VwSO

On Sunday, the City of Ottawa opened nine respite sites at community centres and areas for people to charge their devices, take showers and, in some cases, access some food. The sites continued to be open from 10 a.m. to 10 p.m. on Monday.

The widespread damage caused by the storm prompted the Ontario towns of Clarence-Rockland, east of Ottawa, and Uxbridge, north of Toronto, to declare states of emergency on Saturday and Sunday respectively.

Uxbridge Mayor Dave Barton had said the downtown core sustained significant damage, including to several residential buildings and a brewery. But he said power outages and downed phone lines are causing the most distress.

Internet networks and cellular service were down in many locations.

Barton took to Twitter Sunday, assuring residents that connectivity would be restored as soon as possible.

“Hydro Crews are everywhere working to get us reconnected. Wires may become live so please continue to be safe. We also have Rogers, Bell and Telus staff in town working on connectivity,” he said.

Meanwhile, Hydro Quebec updated that 60 percent of its customers have regained power supply.

“The work continues with 600 teams deployed in the field. It is impossible to give precise recovery times for the rest of the affected clients,” the company said in a series of tweets Monday, adding that the extent and scale of damage make it challenging to access some locations to resolve the outages timely.

“The most affected regions remain the Laurentians, Lanaudière and Outaouais. We remind you not to approach the wires on the ground for safety reasons.”

An investigation has started as Western University’s Northern Tornadoes Project (NTP) deployed teams to Uxbridge and southern Ottawa Sunday to determine whether tornadoes had hit the regions.

“Given the complexity of the damage due to the derecho, it will require thorough analysis in order to classify / rate the event. Work continues,” NTP said on Twitter Monday.

“In addition, an NTP survey team will head to the Rawdon, QC area today to investigate damage associated with a tornado-warned supercell that occurred ahead of the derecho.”

A derecho is a widespread long-lived windstorm associated with a line of thunderstorms, according to Environment Canada.