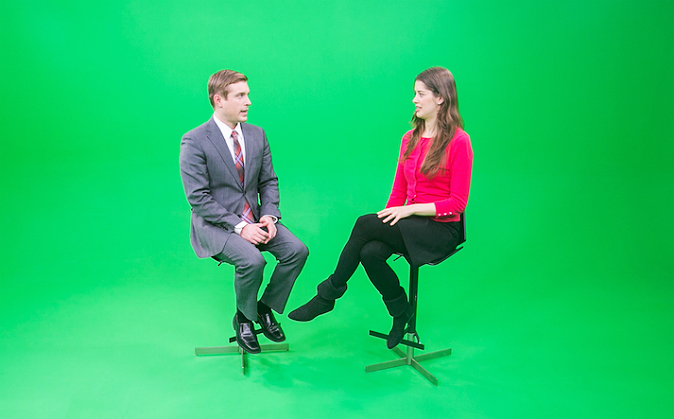 From “Lord of the Rings” and “Avengers,” to the upcoming “Star Wars” movie, green screens have played an important role in transporting audiences to other universes and beyond.

Using green screens to bring imagination to life has changed the way we watch movies, documentaries, and even news programs. They are attractive to people from filmmakers to amateur video makers as it allows them to produce content without the need to build physical sets. It is no surprise then that there’s a growing demand for green screens in New York City across the communication and entertainment industries.

Ben Larkman, general manager of Big Apple Studios in Manhattan, New York said green screens are popular because they require lower costs than physical sets and allow for multiple shows to share the same studio space. He added that this has spurred a large trend in their use.

“[T]he trend is moving away from physical sets to these virtual sets. A lot of people might be surprised looking at NBC or Fox TV or CNN that some of the sets that they think are physical are actually digital and it’s not always easy to tell,” said Larkman.

Larkman started out as a theater technician in his teenage years and has over 20 years experience working in the entertainment industry. He joined Big Apple Studios this year, a company offering studio facilities for white cyclorama and green screen video production.

He also attributes the growing trend to the improvement of green screen technology.

“Now it’s getting to the point where you can make almost as good a set digitally as you can physically,” said Larkman. “It’s a lot cheaper and it’s a lot more flexible.”

According to FilmmakerIQ, a website run by a group of filmmakers, the idea of green screens started in 1898 by George Méliès in his silent film, “Four Heads Are Better Than One.” The use of matting and combining several clips or images in film allowed Méliès to reproduce himself throughout the film. The matte process then evolved to capture action and shadows and was successfully used in the 1933 film, “King Kong.”

In the 1960s and 1970s, Walt Disney incorporated this technique in his films, leading to an academy award for best visual effects for the 1964 film, “Mary Poppins.”

Matting is the process of extracting and compositing film, according to Jeff Foster in his book, “The Green Screen Handbook: Real-World Production Techniques.” Today chroma keying is widely used, where the background is removed and replaced with other footage by eliminating a specific color, usually green, to create the matte.

While the technology is new, the computer processing still follows closely the techniques of Méliès times.

The use of these techniques in film has grown and has expanded to other industries.

“So what you’re seeing is a lot of TV shows, a lot of talk shows, a lot of news programs which in the past would have built physical sets and require a studio dedicated 24/7,” said Larkman. “Going digital allows them to have dynamic things going on in these sets, like images, videos, different scrolling things, and texts around the set. There’s a lot more eye candy with these digital sets.”

Larkman further added that the growing demand for green screens in the city is a result of high real estate prices in New York, which curbs supply. He said that there are only another four or five studios providing similar services as Big Apple Studios in Manhattan.

“[I]t really makes sense, in Manhattan, to be doing 3D virtual sets. You can have 10 different shows sharing one studio. Each of them using their own virtual sets,” explained Larkman.

In addition to green screens, Larkman said white screens are also in high demand for their specific use in interviews and advertisements.

“Most people, if they want to understand what the white cyc look is, think of those Mac ads – ‘I’m a Mac. I’m a PC.’ That infinite white look,” Larkman said. “I’m not sure if this look will stay popular forever, but right now our white cyc studio is booked solid.”

“But with green screen, looking down the road, seeing what’s happening with the technology, I can only see the demand growing for it,” Larkman said.