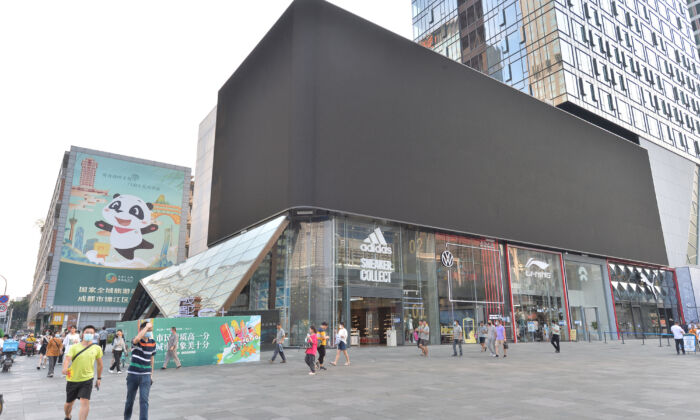 People walking past a screen, which is turned off to save energy, in Chengdu, in China's southwestern Sichuan Province, on Aug. 17, 2022. (STR/AFP via Getty Images)
Social Issues

A southwest Chinese province has extended industrial power cuts as a record-breaking heat wave and drought deplete water levels of the Yangtze River and dwindle hydropower output, hurting the auto industry as factories in the region shut down.

“Since July, the province has faced a grim situation caused by the most extreme high temperatures, the lowest rainfall in the corresponding period in history, and the highest power load in history,” Sichuan government officials said in a statement.

Officials have extended the order of curbing power supplies to factories until Aug. 25, according to financial news service Caixin and a company filing. Pesticide producer Lier Chemical Co. Ltd. said through the stock exchange on Aug. 22 that its facilities in Sichuan received a notice to extend curbs until Aug. 25.

The disruptions added challenges to companies that have already been hurt by the Chinese regime’s “zero-COVID” policy, which aimed to eliminate every infection among communities through movement control, swift lockdown, and repeated testing. The stringent measures have halted factory production, ravaging global supply chains.

U.S. electric vehicle maker Tesla and China’s major state-owned automaker SAIC have told Shanghai authorities that their key component suppliers in Sichuan have been shut down, which may eventually delay production at their Shanghai plants, state media Economic Observer reported on Aug. 19.

The extended power rationing comes as the country is experiencing severe drought amid a record-breaking heat wave. The National Meteorological Center said as many as 262 weather stations—from Sichuan in the southwest to Fujian on the southeastern coast—saw record temperatures during the heat wave, official news agency Xinhua reported.

By Aug. 15, the heat wave had persisted for 64 days, the longest since China started meteorological observations in 1961, the report said.

As the heat wave drags on, the state weather forecaster has raised the national drought alert to “orange”—the second-highest level. Poyang Lake, located in one of the Yangtze River’s flood plains and described as China’s “kidney” because of its role in regulating water supplies, is now 67 percent smaller than the average over the past 10 years, state broadcaster CCTV said.

The country’s longest river, the Yangtze, is drying up, disrupting cargo traffic, and reducing hydropower generation at a time when demand has soared for air conditioners.

Sichuan—a major power supplier to the rest of the country—has recently put a new coal storage base into operation to ensure its thermal plants can operate without disruption. However, about 80 percent of its installed capacity is hydropower, making it especially vulnerable to fluctuations in water supplies.

Sichuan’s capital Chengdu saw temperatures soar to 110.1 degrees Fahrenheit (43.4 degrees Celsius) on Aug. 22, prompting the city to switch off the lights on its subway trains to save power.

Chongqing, another hard-hit city neighboring Sichuan, announced that opening hours at more than 500 malls and other commercial venues would be shortened starting on Aug. 29 to ease power demand.

In Shanghai, the decorative lighting along the iconic Bund riverfront was turned off for two days starting on Aug. 22, after the city was criticized on China’s microblogging platform Weibo for its use of electricity generated in Sichuan, local authorities said in a notice.