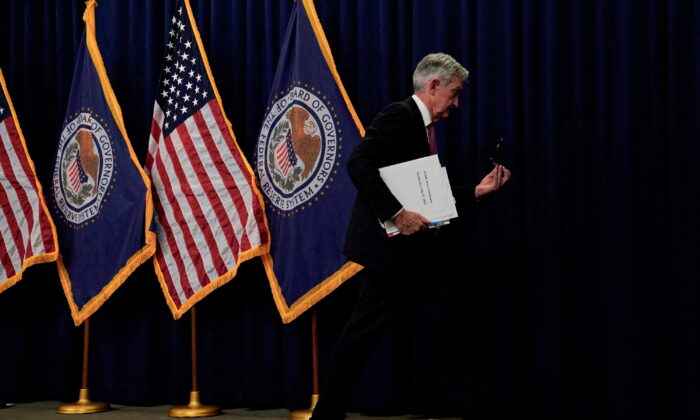 Powell Warns Wall Street That the Punch Bowl Is Empty

And sobers them up with black coffee with an espresso shot

U.S. stock markets tumbled more than 3 percent on Aug. 26 after Federal Reserve Chairman Jerome Powell offered up a stark eight-minute soliloquy telling Wall Street’s “Masters of the Universe” to straighten up, fast, because the Fed wasn’t going to refill the punch bowl.

I said in my July jobs report that the prognostications of the stock peddlers-cum-“analysts” on business TV were “a bit sanguine that the Fed will loosen its tightening of rates,” and predicted the overnight federal funds rate would need to go up to as much as 5 percent to strangle inflation.

Powell seemed to reiterate that hawkish view on Aug. 26 when he said that the Fed “is moving [its] policy stance purposefully to a level that will be sufficiently restrictive to return inflation to 2 percent.”

He went on to say, “In current circumstances, with inflation running far above 2 percent and the labor market extremely tight, estimates of longer-run neutral are not a place to stop or pause.”

Game. Set. Match. The Wall Street pitchmen who were anticipating the Fed would let up rate hikes have been mowed down like dandelions in the path of a weed whacker.

More rate hikes, and likely above a half-percent, are coming when the Fed meets in September and will not likely pause for some time. Federal Open Market Committee members’ June 15 projections for the federal funds rate capped at 4 percent through the end of 2023. Those projections will be updated for September.

But Powell made another statement that should send chills down the backs of the Wall Street stock pushers. While acknowledging the role of supply chain issues in inflation, Powell said: “In my view … the current high inflation in the United States is the product of strong demand and constrained supply, and that the Fed’s tools work principally on aggregate demand. None of this diminishes the Federal Reserve’s responsibility to carry out our assigned task of achieving price stability.”

The reason that should trouble Wall Street is that it seems an almost masochistic acceptance by the Fed chair of responsibility to restrain even supply-side inflationary pressures!

But those pressures are caused by U.S. federal, state, and foreign policies that constrain supplies. For example, the Biden administration’s constraint of oil and gas production and its sanctions against Russia over the Ukraine invasion have all radically escalated inflation in fuel and food.

In the northeast, we in New York state have lived for years with critical moratoriums on fracking and new pipeline construction in favor of “green” policies that favor electricity over natural gas.

Similarly, China’s ongoing zero-tolerance pandemic policies have limited production in and exports from huge swaths of its economy.

I have written ad nauseam about (as regular followers will aver) Milton Friedman’s adage that “inflation is always and everywhere a monetary phenomenon.” My essays have also acknowledged the Quantity Theory of Money (MV=PQ). But if Powell views constraining even supply-side inflation as exclusively his task, as seems clear from his remarks on Aug. 26, consumers will suffer far more than they must and at a critical time for working people and middle-income Americans. The caption for his illustration on the New York Fed website says that credit card debt had increased at its highest rate, year-on-year, in 20 years.

Right now, tens of millions of U.S households are putting their daily cost of living expenses on their credit cards because wage growth has failed to keep up with inflation. Household debt now exceeds $16 trillion (with a “T”), 70 percent of the U.S. economy, and nearly $4.5 trillion of that is consumer debt. Twenty million American households—15 percent of them—are risking a “tsunami of shutoffs,” as an expert quoted by Bloomberg called it, because they can’t afford their utility bills, which have increased an average of 15 percent over last year.

Meanwhile, the Biden administration is raising taxes; hiring tens of thousands of new IRS agents, who will reduce productivity, already the lowest on record, by diverting business owners’ and workers’ attention from their businesses; and fueling the fire of inflation with new spending and student debt forgiveness.

Meanwhile, the yield curve between the 10-year and the 2-year Treasury is inverted by 35 basis points (“bps”), with the return on the 10-year (“long money”) being less than the return on the short-term rate. That occurs because the market has cut back from investment in businesses, favoring Treasury obligations instead of private investment. For this reason, an inverted yield curve is almost a guarantee of recession or worse.

I’ve advocated a reduction in the Fed balance sheet, and targeting longer-term rates (what economists call “yield curve control“), for quite some time as a better means of means of tightening the money supply, raising longer-term rates, and reversing yield curve inversion as the best monetary policy. I believe that while this would inflict pain on the economy, particularly in the housing and capital investment markets, it’s a quicker and more efficient means of ameliorating inflation—and particularly inflation expectations—than periodic increases in the federal funds rate.

Notwithstanding Powell’s seeming embrace of the Sisyphean chore of what he calls the “Federal Reserve’s responsibility to carry out our assigned task of achieving price stability,” the only actual true function the Fed has—and the only mandate for which it has tools—is monetary policy. The Fed, for all its good intentions, can’t control a spendthrift Congress or a failing White House administration bent upon using the president’s executive powers to enhance its political prospects in the midterms.

The Fed shouldn’t attempt to do anything more. Doing so only spooks the markets unnecessarily, as it did on Aug. 26, and eventually harms consumers and businesses.