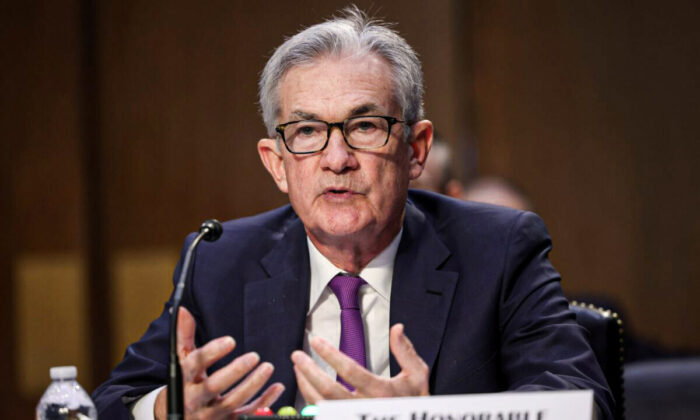 Federal Reserve Chair Jerome Powell was questioned on the persistence of inflationary pressures during a Senate hearing on Nov. 30, with the central bank chief acknowledging that it’s “time to retire” the word “transitory” from the inflation narrative, noting that factors pushing inflation higher would stick around “well into next year.”

Powell made the remarks during testimony before the Senate Committee on Banking, Housing, and Urban Affairs, while responding to a question from Sen. Pat Toomey (R-Penn.), who challenged the Fed’s “transitory” framing of the current bout of inflation, which hit a three-decade high in October and accelerated its monthly pace from the prior month.

“I know you believe this is transitory,” Toomey said. “But everything is transitory. Life is transitory. How long does inflation have to run above your target before the Fed decides maybe it’s not so transitory?” he asked while questioning whether the Fed’s continued stimulus represented a weakening of the central bank’s commitment to price stability.

Powell said the Fed’s inflation test for rolling back its accommodative monetary policy stance has “clearly” been met now, with inflation running well above the central bank’s target of around 2 percent.

“I think the word ‘transitory’ has different meanings to different people. To many, it carries a time semblance of short-lived. We tend to use it to mean that it won’t leave a permanent mark in the form of higher inflation,” Powell said.

“I think it’s probably a good time to retire that word and try to explain more clearly what we mean.”

Powell maintained, however, that the Fed continues to expect that inflation will “move down significantly” over the next year as supply-side bottlenecks ease. Noting the difficultly in predicting the persistence of supply constraints, Powell said it seems that factors driving inflation higher “will linger well into next year.”

Powell added that there’s still ground to cover in terms of labor market recovery, a key touchstone for the Fed, while reiterating his commitment that the Fed would use its policy tools “both to support the economy and a strong labor market and to prevent higher inflation from becoming entrenched.”

Powell said it’s taking longer than expected for the labor force participation rate, which has been stuck at historically depressed levels for some time, to edge back up.

Powell’s remarks come as pressure builds for the Fed to abandon its “transitory” inflation narrative, with a number of prominent economists challenging that framing and urging policymakers to start dialing back easy money policies to avoid having to slam on the brakes and possibly derail the recovery.

One such economist is Allianz chief economic adviser Mohamed El-Erian, who warned in an interview with Fox News on Nov. 28 that rather than easing loose monetary conditions gradually, the Federal Reserve might hit the brakes hard later to dampen elevated price pressures and inadvertently spark a recession.

“We haven’t got a single historical experience in which the Fed has been late to the policy challenge and has not caused a recession,” El-Erian said. “So rather than hit the brakes hard next year, it’s much easier to ease your foot off the accelerator starting now.”

At its most recent policy meeting, Fed officials voted to start dialing back the central bank’s $120 billion in monthly asset purchases at a pace of $15 billion per month, although they left the door open to a faster schedule if conditions warrant. At the same time, they ruled out any interest rate increases before the wind-down of the asset buys.

El-Erian also told Fox that he expects a number of second-round inflationary effects, such as people demanding higher wages and corporations raising prices further to maintain margins, to keep price pressures high into next year.