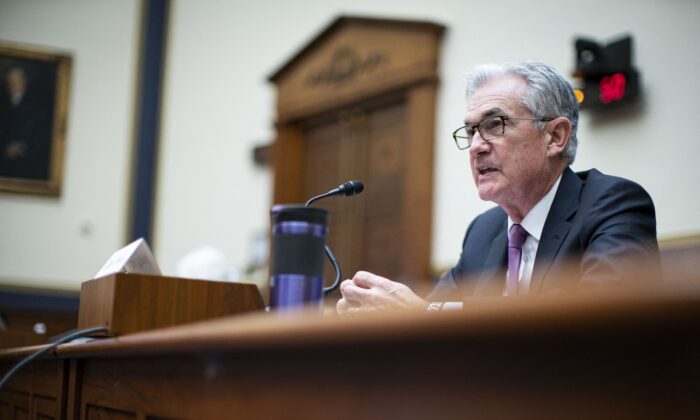 Powell Says Inflation Risks Rising, but Fed Can Be ‘Patient’

WASHINGTON—Federal Reserve Chair Jerome Powell said Friday that the tangled supply chains and shortages that have bedeviled the U.S. economy since this summer have gotten worse and will likely keep inflation elevated well into next year.

The Fed is not yet prepared to lift its benchmark interest rate, he said, though he suggested that the economy may be ready for a rate hike next year.

There is now greater risk of “longer and more persistent bottlenecks and thus to higher inflation,” Powell said at a virtual conference hosted by the South African Reserve Bank.

Powell, echoing many economists, has previously said that shortages and higher prices are mostly a result of the pandemic’s impact on supply lines, with factories in Asia temporarily closing amid COVID-19 infections and dozens of cargo ships anchored offshore.

He said Friday that he still thinks those supply problems will be resolved over time, but the Fed will be vigilant and take steps to push inflation back down to its 2 percent goal if necessary.

“No one should doubt that we will use our tools to guide inflation back to 2 percent,” he said.

Consumer prices, according to the Fed’s preferred gauge, jumped 4.3 percent in August from a year earlier, the fastest such increase in three decades.

The Fed chair said he is ready to taper, or reduce, the central bank’s $120 billion in monthly bond purchases, which are intended to lower longer-term interest rates and encourage borrowing and spending. Powell is widely expected to announce the tapering after the Fed’s next meeting, Nov. 2–3.

But he added that it would be “premature” to raise the Fed’s short-term interest rate, because the job market needs more time to recover. Powell noted that there are still 5 million fewer jobs in the United States than before the pandemic.

That healing could pick up in the coming months, Powell said, as the coronavirus Delta variant fades. Hiring could then accelerate, potentially back to the levels of this summer, when roughly 1 million jobs were added in June and July, he said.

“It’s very possible we will be at or near … our full employment goal next year,” he said. Fed officials estimate that maximum employment is roughly when the unemployment rate reaches 3.8 percent, though most central bank policymakers say they look at many other measures in making that determination.

Some officials have also said that the Fed’s other goal—stable prices rising at an average of 2 percent over time—will also be met by next year. Those are the conditions that, under the Fed’s policy framework, would support a rate hike.

In September, half the Fed’s policymakers supported a rate hike late next year, while half preferred to wait until 2023 or later. But financial markets expect at least two rate hikes by the end of 2022, according to futures prices tracked by the CME Group.