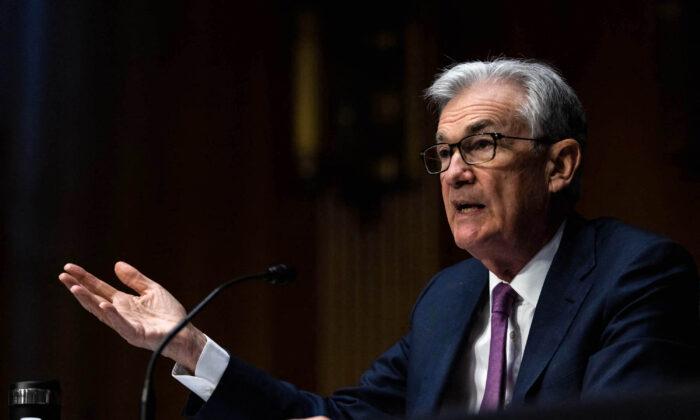 On Jan. 26, Federal Reserve Chairman Jerome Powell had to make a difficult announcement. At the Federal Open Market Committee’s press conference, Powell announced that Quantitative Easing would end in early March, earlier than expected, and the Fed was likely to announce the beginning of a tightening cycle at its March meeting.

For any Fed Chair, embarking on a tightening cycle is a daunting and uncomfortable task. Every Fed tightening cycle eventually leads to a recession at best, while the last two have led to either a crash in stocks or an outright financial crisis. The prospects of Powell being able to successfully navigate a tightening cycle are slim to none.

With inflation spiraling out of control, Powell had to do the one thing he did not want to do, which was put monetary policy on a tightening trajectory. Powell did not have much of a choice as both President Biden and Congress are pressuring him to put an end to the Fed’s easy monetary policies and inflation.

While wages are rising for most Americans, inflation is rising even faster. Americans have less purchasing power despite having more take-home pay, which typically happens during a recession. With less money to spend, demand for goods and services must fall, unless consumers choose to finance their lifestyles.

The problem with the inflation narrative is that it is largely being blamed on supply-chain bottlenecks. Experts indicate that demand is likely to remain robust for the coming year, which will put continued pressure on prices as goods and services remain in short supply. By tightening monetary policy, Powell hopes to reduce demand until it is at equilibrium with supply.

The services side of the economy is being impacted by the Omicron variant, as workers are dealing with a highly transmittable strain. Either the worker, or someone in their family, is being infected, which is impacting the ability of people to go to work.

On the other hand, the goods side of the economy is dealing with bottlenecks as idle ships sit off the ports of Los Angeles and Long Beach waiting to unload. Until the cargo containers can be unloaded and make their way to warehouses around the country, the supply of goods remains limited.

While most believe inflation is a supply issue, demand is waning. Without direct-to-consumer fiscal stimulus, consumers have less money to spend due to rising inflation. Rising inflation and the absence of fiscal stimulus pose a problem for Fed Chair Powell, who will curb demand through the withdrawal of monetary stimulus.

The risk Powell faces is that he will end the Fed’s monetary stimulus program at the same time demand falls off a cliff. Yet, with inflation running at the highest level since the early 1980s, and consumers extremely frustrated, Powell has little choice but to end Quantitative Easing and begin to raise interest rates.

On all accounts, Powell is right. The three main components of the Consumer Price Index, which tracks consumer inflation, are food, energy, and shelter. Food prices are likely to remain high for the foreseeable future as supply-chain issues have led to a global shortage of fertilizer. Crude oil prices remain high and are pressing higher, which are causing gasoline prices to stay high. Rents tend to lag home prices, and they too are expected to increase.

Yet, history shows that since the 1980s, bouts of inflation have led to periods of disinflation, or outright deflation. The reason high rates of inflation have been transitory for the past three decades is that consumers ultimately reject those higher prices as wages have failed to keep pace with inflation.

Without sufficient wage growth to afford higher prices, consumption inevitably falls during periods of high inflation. Inventories then begin to build, which initially provide a boost to the Gross Domestic Product, and then the economy lapses into a recession.

Powell is likely aware that the probability the economy will fall into a recession is extremely high. Most bouts of inflation since the 1980s have marked the beginning of recessions, with the last two being severe.

The reason Fed Chair Powell begrudgingly bowed to the pressers of inflation is that he had no choice. The credibility of the Fed remains at stake, leaving him no choice but to put out the inflationary fire that most believe started due to an overextended period of easy monetary policy.