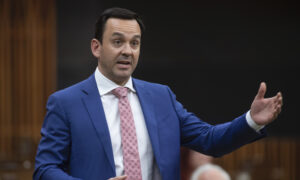 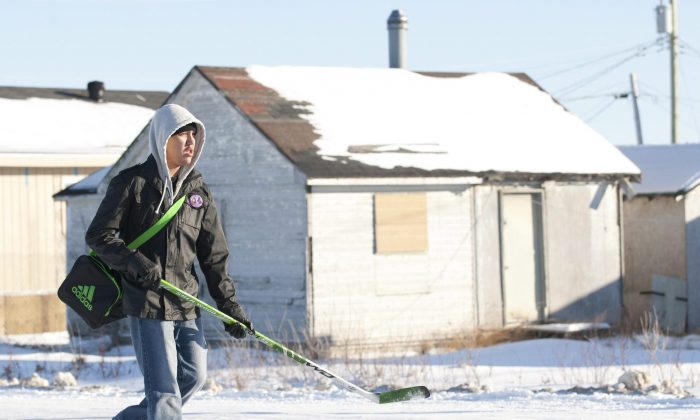 A youth walks past a boarded up house in Attawapiskat, Ont., Nov. 29, 2011. A new report finds that indigenous children in Canada are more than twice as likely to live in poverty than their non-aboriginal counterparts. (The Canadian Press/Adrian Wyld)
Canada

A report released May 17 by the Canadian Centre for Policy Alternatives says indigenous children in Canada are more than twice as likely to live in poverty than their non-aboriginal counterparts.

“I am not surprised [by the findings],” said Day, the Ontario regional chief for the Assembly of First Nations.

“I’m only surprised it has taken this long.”

Day, who is also his advocacy organization’s lead on the health portfolio, said poverty is often a big part of the reason why people flee their communities, only to end up in “gateway” centres such as Thunder Bay, Ont., where things usually get worse.

“This is all as a result of poverty,” he said. “We’ve watched Thunder Bay and how they’ve struggled.”

The study, which explored poverty rates and the territories as measured by income, also documented the dire conditions experienced by status First Nations children, including 60 percent of those who live on reserves.

Poverty rates are highest for First Nations youngsters on reserves in Manitoba at 76 percent and Saskatchewan at 69 percent, the study found.

Poverty rates are highest for First Nations kids on reserves in Manitoba at 76 percent and Saskatchewan at 69 percent, the study found.

In order to present its findings, the institute crunched data collected during the 2011 National Household Survey and built upon research it previously presented in 2006, which used census data to examine child poverty rates.

The report’s co-authors also said rates of poverty on reserves have gone uncalculated by the federal government and therefore hidden from view, despite anecdotal evidence that indicates there are serious problems on reserves.

“It is important to point out that Statistics Canada reports on poverty rates do not include people who live on a reserve or people living in the territories where roughly half of all Inuit people are located,” the report said.

“Because this data is excluded, official poverty rates in Canada are lower than they would be if these populations were counted. Poverty rates for indigenous people, especially status First Nations and Inuit, are reported to be much lower than a full count would indicate is truly the case.”

Manitoba NDP MP Niki Ashton seized on the report as she took aim at the Liberal government’s budget, which critics said was sorely lacking in funding for First Nations child welfare.

“In Manitoba, three out of four children living on-reserve live in poverty, and this did not just happen,” Ashton said during question period in the House of Commons.

“It is the result of years—decades—of underfunding of education, housing, child welfare, health, clean water, and the list goes on.”

Despite a clear ruling from the Canadian Human Rights Tribunal, the Liberal government has failed to provide equitable funding for aboriginal child welfare, she said.

Poverty in indigenous communities has gone on for far too long, answered Indigenous Affairs Minister Carolyn Bennett, who defended the government’s fiscal blueprint.

“I believe that in Budget 2016 we are making historic investments in housing, water, education, and all of the … things that will raise these children out of poverty and do the right thing by these children.”