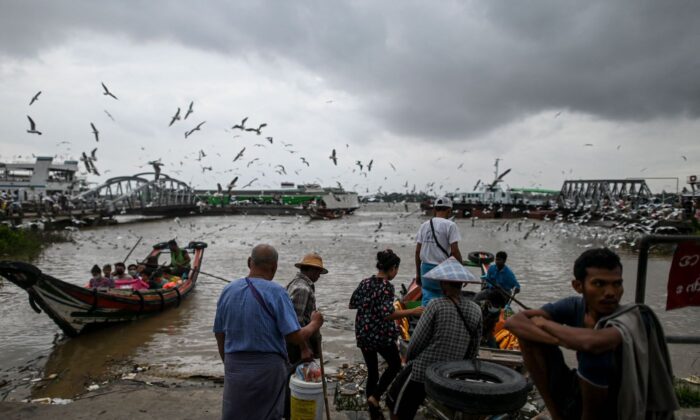 People board a ferry boat in Yangon River in Yangon on March 22, 2022. (AFP via Getty Images)
Asia & Pacific

Economic growth in the military-ruled country is projected to grow 3 percent in the fiscal year ending in September 2022, following an 18 percent contraction the previous year, according to the World Bank.

“A return to pre-pandemic levels of economic activity is unlikely in the near term, in sharp contrast to the rest of the East Asia and Pacific region, where GDP in all large countries is estimated to have recovered above 2019 levels or is projected to do so in 2023,” it said.

Poverty is estimated to have doubled in Burma—also known as Myanmar—compared to March 2022, with about 40 percent of the 54 million population living below the national poverty line, the bank stated.

Burma’s consumer price index jumped 17.3 percent in March, and its annual GDP is expected to remain 13 percent lower than in 2019.

Rising commodity prices, internal strife, electricity outages, and persistent logistics and financial sector disruptions are among the difficulties that have caused the sluggish economy.

The bank stated that uncertainty among businesses has increased due to the rapid issuance of new policy instructions, although some sectors, particularly the manufacturing industry, have stabilized during the past 12 months.

It warned that the Kyat depreciation and supply chain disruptions drive up import prices. The Kyat has depreciated almost 50 percent against the U.S. dollar since the military junta seized power in February last year.

“The balance of payments situation is of growing concern, with U.S. dollar shortages already limiting the availability of several imported products, including fuel,” it added.

Local companies were required to deposit foreign currency at local banks and exchange money within one working day, while ministries were told not to use foreign currencies for domestic transactions.

The Central Bank also demanded that companies with up to 35 percent foreign ownership convert foreign exchange into the local currency or face repercussions.

U.N. special envoy Noeleen Heyzer said in a statement last month that about 14.4 million people, or one-quarter of the entire population of Burma, are in dire need of humanitarian assistance.

“The military continues its disproportionate use of force, has intensified its attack on civilians and increased operations against resistance forces, using aerial bombings,” Heyzer said. “Civilian buildings and villages have been destroyed by fire and internally displaced populations have been attacked”.