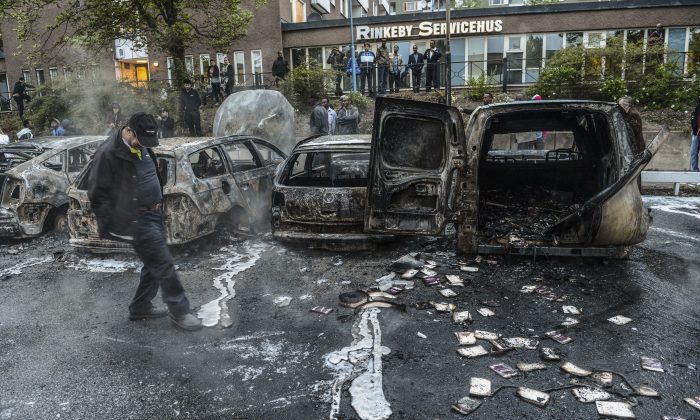 A bystander checks the debris of a burnt out cars in the Stockholm suburb of Rinkeby after youths rioted in several different suburbs around Stockholm, Sweden, for a fourth consecutive night on May 23, 2013. In the suburb of Husby, where the riots began on Sunday in response to the fatal police shooting of a 69-year-old machete-wielding man, 80 percent of residents are immigrants and the unrest has highlighted Sweden's failure to integrate swathes of its immigrant population. (Fredrik Sandberg/AFP/Getty Images)
12- OBSOLETE

Poverty and Alienation Behind Riots in Sweden

GOTHENBURG, Sweden—The night between May 19 and May 20, cars were set on fire in Husby, a suburb of Stockholm. Windows were smashed and the subway station was vandalized, and when the police arrived, they were met with violence. Similar incidents occurred both in Husby and other suburbs of several major Swedish cities during the entire week, and theories about the reasons behind the unrest are manifold.

The activist organization Megafonen in Husby, which purports to “organize young suburban people in the struggle for social justice,” according to their website, early on claimed that the triggering factor was an incident that took place on May 13.

On that day, a 69-year-old Husby resident died from a police bullet after a failed negotiation. He had been wielding a machete and scaring other residents. The incident is now being investigated.

When the riots erupted, they were a response to the “murder” of the 69-year-old, who was an immigrant, Megafonen said. The organization, while not in any way supporting the riots, also attempts to explains them as “the only way to express frustration when all democratic avenues are closed.”

Two common factors behind the restive suburbs are poverty and a high number of immigrants, and the two factors are linked, as it is very difficult for many immigrants to find employment in Sweden, despite the country’s generous immigration policies.

Related discussion:Should Illegal immigrants in the US be put on a path to citizenship?

Sweden, a country of 9 million, granted residency or work permits to over 111,000 people last year, which was an increase by 19 percent from 2011.Of these, 44,000 were asylum seekers, primarily from countries like Syria, Afghanistan, and Somalia. This is a 48 percent increase from 2011.

Of the newly arrived immigrants, 60 percent have very limited education, and many are illiterate, according to statistics from the Swedish Public Employment Service. This makes it very difficult for them to meet the high demands of the already strained Swedish employment market. According to Eurostat, the European Union’s directorate-general for statistics, only 2.5 percent of the available jobs are actually open to this group, compared to 17 percent in the EU as a whole.

Many of these immigrants wind up with their kin in suburbs like Husby, locked into permanent unemployment. This in turn affects their children, who grow up in difficult economic circumstances and with little contact with the rest of Swedish society. The economic crisis has also hit this group hard, with cutbacks on various support measures.

Nima Gholam Ali Pour, commentator and former politician, explained: “Many of these youths never get out of their own areas, so they don’t really have an idea of what Sweden, or even the rest of Stockholm, looks like.”

“They only know their own block,” he said. “They have never really been shown how democracy works, and that very limited image of democracy that they have been exposed to is not a positive one.”

Pour said that in a liberal democracy, everyone has the freedom to do what they want, as long as they respect the freedom of others as well. The rioting youths, however, are limiting the freedom of others, he said. “If someone parks their car somewhere, I can’t go and set it on fire. If I do, I’m trampling on his freedom.”

Criminologist Jerzy Sarnecki told Swedish newspaper Aftonbladet that there are often legitimate grievances behind these kinds of riots, such as problems with education, unemployment, or perceived abuse from the police.

Violent individuals often pick up on this antagonism and use it to further their own agendas, Sarnecki said. “They use it for their own purposes, which is often about power, the satisfaction in getting revenge, or showing off in front of their friends,” he said.

Eight days after the riots began, things are getting back to normal, at least in Stockholm, said Kjell Lindgren, press spokesperson for the Stockholm police.

At the height of the unrest, the Stockholm police had to call for reinforcements from other parts of Sweden. The reinforcements are now leaving. The police will keep up a presence in the restive areas, though. “Our reasoning is that it’s not good for the suburbs if we all just leave now. We are in this for the long haul,” he said. Many residents have questions, and Lindgren said that the police want to stay around to help explain things to them.

The situation has put a lot of strain on the residents of the affected areas, according to Lindgren. After a hard day’s work, many of them will lie awake at night, wondering if their car and workplace will still be in one piece tomorrow, and if they will be able to send their children to school.

The criminal investigations will also continue, Lindgren indicated: “We have many investigations where we have good hopes of bringing the people who have caused all this unrest here in Stockholm to justice.”