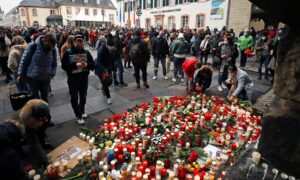 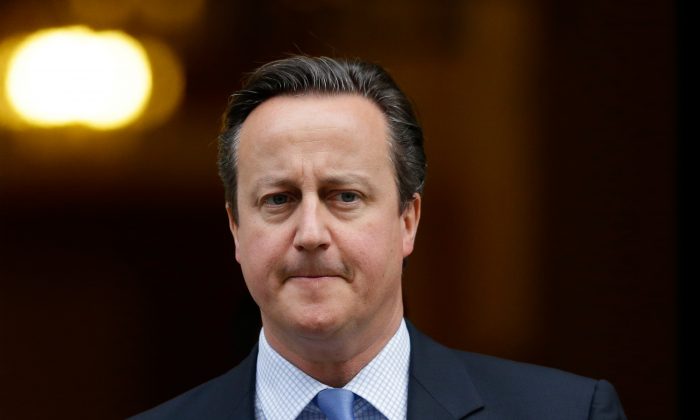 LONDON—Uncertainty over Britain’s future in the European Union sent the pound plunging Monday, as Prime Minister David Cameron tried to shore up support for remaining in the bloc when the U.K. holds a referendum in June.

The pound fell 1.7 percent to $1.4166, and also sagged 0.5 percent to 1.28 euros, as bookmakers shortened the odds on a vote to leave — though betting markets still favor a “remain” victory.

Simon Smith, chief economist at FxPro, said the next four months “won’t be a fun time” for the pound, which has weakened in recent months.

“It’s more the uncertainty that will weigh on the currency, rather than investors taking a view on the outcome and the implications for the economy, which are hard to argue either way,” he said.

Many big businesses have warned that leaving the EU — with its open internal market of 500 million people — would hammer the British economy. But London Mayor Boris Johnson, a high-profile supporter of an “out” vote, said fears of economic catastrophe were “wildly exaggerated.”

He likened he warnings to those who had said that if Britain did not join the euro single currency, London’s City financial district would suffer and “great mutant rats would gnaw the faces of the last bankers.”

“It didn’t turn out to be true. On the contrary, the City of London is overwhelmingly the preponderant financial center here in this part of the world, indeed it is the biggest on earth,” Johnson said during a question session at City Hall.

The rhetorical stakes shot sky-high as politicians began a four-month battle to sway British voters ahead of the June 23 referendum, with the opposing sides battling over whether EU membership made Britain more or less safe from terrorist attacks.

Former Conservative leader Iain Duncan Smith said Sunday that the EU’s “open border,” and the inflow of millions of migrants from the Middle East and Africa, made it more likely terrorists could slip into the UK — even though Britain is not part of the EU’s borderless Schengen zone.

But Defense Secretary Michael Fallon argued that EU membership made the U.K. safer.

“It is through the EU that you exchange criminal records and passenger records and work together on counter-terrorism,” Fallon told the BBC Monday.

Cameron: Britain’s Referendum on EU Membership to Be June 23

“We need the collective weight of the EU when you are dealing with Russian aggression or terrorism. You need to be part of these big partnerships.”

Cameron was due to make his case in the House of Commons Monday, arguing that a deal he struck Friday with 27 other EU leaders gives Britain “special status,” exempting the U.K. from ever-closer political bonds with the bloc and protecting the rights of the pound against the euro single currency used by 19 EU countries.

Cameron’s governing Conservative Party is deeply split on the issue, with as many as half of Tory legislators in favor of leaving the EU — a prospect known as Brexit.

They include Johnson, whose decision to back Brexit was a big boost for the “leave” campaign.

In a column for Monday’s Daily Telegraph newspaper, Johnson wrote that the referendum offered a “once-in-a-lifetime” chance for real change.

Cameron, EU Leaders Still Have ‘Lot to Do’ to Reach Deal

Unlike some dyed-in-the-wool Euroskeptics, who want Britain to leave the bloc entirely, Johnson suggested his goal is to renegotiate a new relationship with the EU after a Brexit vote.

“There is only one way to get the change we need — and that is to vote to go; because all EU history shows that they only really listen to a population when it says ‘no,'” he wrote.

Six of the 23 members of Cameron’s Cabinet also have announced they will campaign for an exit, though most of the senior figures say they will support the prime minister.