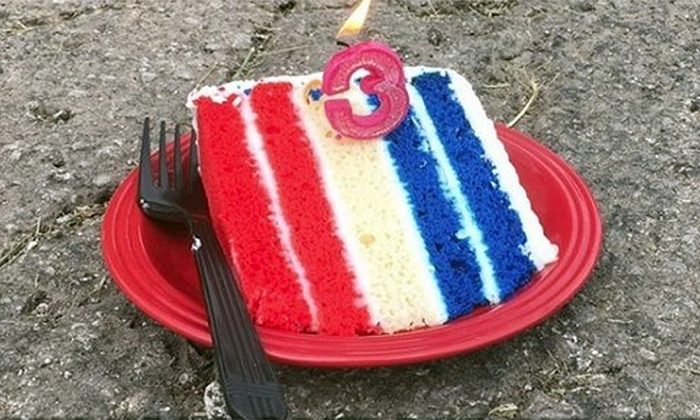 A slice of cake with a candle to celebrate a pothole's third month birthday in Kansas City, Mo., on July 2, 2019. (Frank Sereno/Facebook)
US News

A Missouri man who used a birthday party to convince the city council to repair a 3-month-old pothole is throwing another party to celebrate the pothole’s “graduation” on July 5.

Waldo resident Frank Sereno is claiming victory after Kansas City Council bowed to community pressure to fix a pothole that had been waiting three months to be repaired.

Sereno bought a cake and candle and even held a small celebration for the pothole.

“[I decided] I am going to make an excuse to have a celebration for [the] pothole” he told KCTV. “[I] went and got some cake, got a birthday candle and came out [and] lit it for pothole, and he seemed thrilled with the idea.”

The hot weather forced him to keep the ceremony short and sweet.

“I didn’t sing to him,” Sereno told KCTV. “I thought about it but it was a little bit warm and I thought, ‘How about we just do the cake?'”

He took photos of the birthday celebration and uploaded them to Facebook.

“Fellow Waldo neighbors, please help me celebrate the third month birthday of this pothole I reported back in March yet is still not repaired,” he said on a Facebook post that has since been removed. “Enjoy your delicious Waldo Price Chopper cake, pothole.”

The post not only attracted the attention of local authorities but also many parts of the nation, prompting council to fast-track the road work.

Sereno claims he had already phoned the city multiple times to ask and follow up about the pothole’s repair work.

“You can see that the asphalt is completely degraded,” he told KCTV. “This is just a symptom of the horrible road conditions that we have here in Kansas City, Missouri … I think we need to look at this with a little bit more of a priority for the city.”

After learning the pothole would finally be repaired, Sereno decided to hold a “graduation” day ceremony and invite the whole neighborhood to enjoy cake and light refreshments with him.

“Pothole has been repaired,” Sereno said on Facebook. “To celebrate, my fellow Waldo neighbors are warmly invited to the Waldo Pothole ‘graduation’ ceremony on July 5, 2019, at 5 p.m. at the corner of 83rd and Cherry Street, Kansas City, Missouri, 64131.”

The Kansas City Public Works Department claimed the delayed road work was due to wet weather.

“There’s a lot of potholes still on the list we’re working through,” department spokesperson Maggie Green said, according to KMOV4. “Our crews are out on all the [maintenance] districts working through the 311 backlog.”

She estimated the pothole on Cherry Street would be repaired by the end of the week.

It’s not the biggest pothole in Waldo, but it’s the only one (as far as I know) that got cake on its birthday. https://t.co/BQqZKY0c4Z via @KCTV5

“Glad it’s fixed but now I don’t get McLain’s Cake,” JoAnne Grossman said on Facebook. “Their white cake is spectacular.”

“Omg, you are too funny,” Starla Rowland Cipolla said on Facebook. “Heard about it, did not know it was you.”

“I’ll be there all the way from Sioux Falls … unless I get lost in a pothole on Holmes Road,” Skip Baszler said on Facebook.