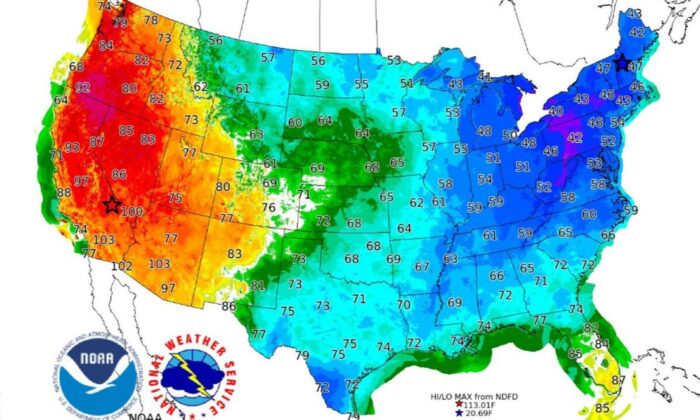 A contrast between temperatures on the West and East Coast on Saturday as a portion of the polar vortex brings bitter cold air to the Northeast. (NWS WPC)
US News

Potentially Historic May Snowstorm Headed for New England This Weekend

A snowstorm could hit parts of the East Coast this weekend, and it might bring historic mid-May totals for New England and the Northeast United States.

“A late-season snowstorm becomes increasingly likely for the interior Northeast beginning Friday and culminating on Saturday,” the National Weather Service (NWS) wrote on its website.

“A late-season snow event for the interior Northeast beginning on Friday” could occur as a low-pressure system intensifies while moving across the Tennessee Valley before heading to the Appalachians.

“Rain can be expected to change over to wet snow, possibly heavy, over the central Appalachians on Friday before blustery winds and colder air ushering in on the back side of the storm. By Friday night, the low-pressure system is forecast to further intensify as the storm center skirts the New England coast,” the weather agency said.

A “significant amount of wet snow” can then be expected in the interior portion of New England after that, starting late on Friday into early Saturday, according to the NWS.

Up to a foot of snow could be possible in the extreme northern part of New England, while some nearby areas could see 6 to 8 inches. Cities that may get snow include Syracuse, New York; Rochester, New York; Binghampton, New York; Albany, New York; Scranton, Pennsylvania; and Burlington, Vermont, forecasters said.

Millions of people are already under freeze watches in the Midwest and Ohio Valley.

The current heat wave is resulting in more than a dozen record or near record highs for today (Wednesday), with several high temperatures above 100 degrees. pic.twitter.com/ZxMEajya0x

Forecasters also say that heavy rain is also possible along the Interstate 95 corridor.

Other than snow, there will be record low temperatures across much of the East Coast due to a cold air mass being pushed southward into the United States behind the storm.

“This will be in stark contrast with near record heat across southern California, the Desert Southwest, and the southern Rockies. In addition, fire danger will be very high today over much of the southern Rockies as the low pressure system develops over the central Plains,” the agency said.