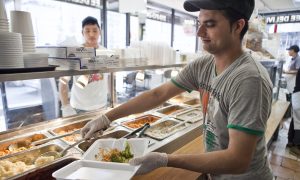 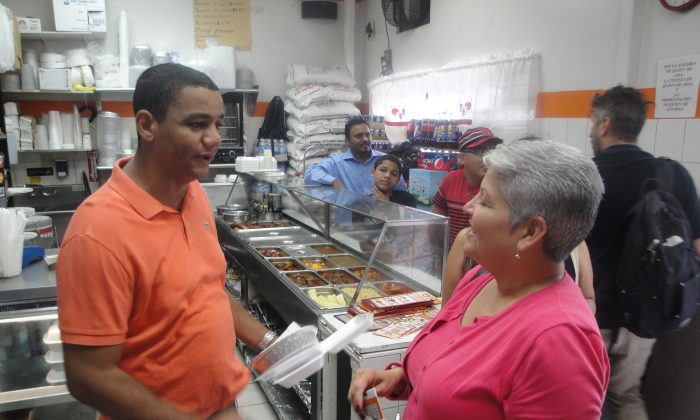 Pablo Martinez talks to Councilwoman Maria del Carmen Arroyo at his restaurant, the Dominican Restaurant, on East 156th St. in the Bronx, Aug. 30, 2013. Martinez is concerned about how much money a proposed ban on polystyrene containers and packaging would cost his business. (Sarah Matheson/Epoch Times)
New York

NEW YORK—Legislation that would ban the use of polystyrene packaging (commonly referred to as Styrofoam) in New York City restaurants has worried some small business owners in the Bronx, who say they are already under a lot of financial pressure.

Mayor Michael Bloomberg said in his State of the City speech in February that he would ban the packaging before he left office, as an environmental effort and to save taxpayers money.

“Styrofoam increases the cost of recycling by as much as $20 per ton, because it has to be removed,” Bloomberg said during his Valentine’s Day address.

But Council member Peter Vallone Jr., who wrote a bill on plastic bag recycling in the city, said polystyrene can be recycled, and the council should consider that before putting more pressure on small business owners.

Pablo Martinez is the owner of the Dominican Restaurant on East 156th St. in the Bronx. It’s a small restaurant, with only three tables and seven chairs.

Martinez’s restaurant uses polystyrene cups and plates for both diners and takeout, and lunch boxes for chicken. He also uses round aluminum dishes, with plastic covers, but said the cost is about five times higher than polystyrene.

Replacing polystyrene would be easy for the cups, he said, but the plates and lunch boxes would be challenging. Martinez said the only alternative is aluminum, because paper would be too flimsy for the food he is serving.

Speaking through a translator, Martinez said the Department of Health is “on them all the time about different things, and there has been a great deal of tension and stress.”

Martinez’s said he was getting inspections and fines every four months—the lowest fine was $3,500, and the highest around $5,000.

Hearing that his costs may increase further if polystyrene is banned was worrying him, especially with his son in college.

Council member Maria del Carmen Arroyo went to Martinez’s and four other restaurants, near her Bronx office Friday, Aug. 30. She said she was there to hear the owners’ concerns about the potential ban on polystyrene, in her capacity as chair of the Health Committee.

“This is not a rally against the legislation,” she said. “ This is to learn about the nuances for business owners,” such as operating costs.

Members of the Restaurant Action Alliance NYC accompanied the council member as she visited the restaurants. The Alliance is a lobby group against banning polystyrene in city restaurants that formed about a month before the legislation was introduced to council.

The alliance members had been contacting and recruiting New York restaurant owners to join its campaign. Kris Hlatky said about 2,300 had joined so far.

One alliance member, Ruperto Morocho owns two restaurants near the Third Avenue-149 St subway in the Bronx, Delicioso and El Nuevo Delicioso. He asked why the City would not just consider recycling the polystyrene.

Morocho said he does business in an area where the poverty rates are high, so he has to keep his prices low to attract customers.

High rent, taxes, fines from the health department, and now a potential ban on polystyrene, was putting a lot of pressure on restaurant owners, he said.

Some owners may choose to close their restaurants and invest in another industry, or move to another state, he said.

Amilza Orellana, the manager at the Mexicozina Taqueria restaurant, said she felt the government was “harassing small businesses in poorer communities.”

She said the cost of replacing polystyrene with aluminum would be three times higher.

Marcos Entenza, a former health inspector who retired in 2012, said language barriers, coupled with inconsistency and bad attitudes from health department staff during inspections, had made some restaurant owners feel very wary about dealing with the city.