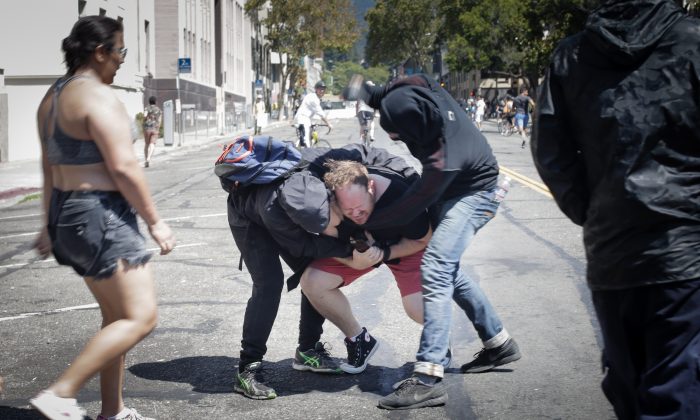 Postmodernism: How Nihilism Consumed the Left

We live in an era of pessimism and nihilism, when hope and purpose have been stripped from existence. From Marcel DuChamp’s sculpture “Fountain,” to the anarchistic rage of the movie “Fight Club,” what remains is an ugly husk of self-hatred that consumes society from within.

While it can be difficult to explain this destructive phenomenon, one word sums it up: postmodernism.

Cultural Marxism—the use of critical and literary theory to deconstruct the West—is part of that. All our social norms and customs are put through a filter of Marxian class consciousness, turning everything about Western culture and identity into oppression and bigotry.

Gone is any Western exceptionalism—individual rights, the scientific method, religious liberty, separation of church and state, to name a few. Instead, we are told that the West is imperialistic, intolerant, and repressive. Thus, any sense of Western pride is blamed on false consciousness and xenophobia.

This gradualist version of Marxism, emerging out of direct competition with the revolutionary kind, doesn’t fully explain the postmodern era we are living in. Undoubtedly, the critical and literary theory of the Frankfurt School played a pivotal role in its development, but this isn’t the full story. To explain this, we need to go back to the 18th century.

The Age of Reason

This marked a turning point in a rather short-lived period of about 150 years. An anti-Enlightenment movement laid the groundwork for the French Revolution, with Jean-Jacques Rousseau being its most prominent civic thinker. Whereas Locke advocated for individual “natural rights” of life and property, Rousseau argued for a collective “general will,” and citizens being “forced to be free.” No surprise, then, that the French Revolution was so bloody, considering its foundation was built on such a tyrannical pretext.

The French Revolution led to the rise of Napoleon, a pattern of strongman out of the chaos that would repeat itself many times thereafter. When the Germans were trampled underfoot by Napoleon’s forces, they falsely blamed that on the effects of the Enlightenment, particularly because the French had cleared away the traditions of church and monarchy so violently.

However, the Germans were as vehemently opposed to the Enlightenment as the French, although this grew in the 19th century as Germans adapted the collectivism found in France.

The anti-Enlightenment sentiment of the Germans truly began with Immanuel Kant, who attacked the progress of reason with all his might. He argued that a noumenal world existed beyond the human senses, and, therefore, there would always be elements unexplainable by reason.

Kant, being a religious man, wasn’t motivated by the secular ideals of Frenchmen such as Voltaire, but rather, the preservation of God in an age of reason.

German Idealism stemmed from both positions, and this is where postmodernism is truly rooted. Georg Wilhelm Friedrich Hegel, Martin Heidegger, and a host of other German thinkers built on not only the anti-reason of Kant, but the anti-individualism of Rousseau.

As the modern era emerged at the end of the 19th century, the progress of the Enlightenment was being swallowed by a cacophony of reactionary voices, leading to another movement known as existentialism. It combined elements of both French and German thought, leading to thinkers like Friedrich Nietzsche in Germany, and later, Jean-Paul Sartre in France.

Presented as a highly individualistic response to the decline of Christianity in the West, existentialism was really nothing more than pseudo-philosophical narcissism, constrained only by arbitrary limits based on power and will.

Also around the end of the 19th century, socialism and communism were growing in popularity. While they couldn’t be more different from existentialism, a crisis of the left would lead to both schools of thought merging by the mid-20th century. How this took place is a fascinating, yet disturbing, insight into the human psyche.

When communism took control of a third of the planet after World War II, the left rejoiced at the prospects of a utopian future. It wasn’t too long, however, before this optimism disappeared.

Despite repeated reports and warnings about the inhumanity of communist regimes, even from the very beginning of the Bolshevik revolution, the denouncement of Stalin in 1956 by Nikita Khrushchev is a critical juncture for the left. No longer could the left deny that in the media and academia, covering up the tens of millions murdered by this brutal ideology.

We find ourselves today with a nihilistic left that wants the world to burn because they didn’t get what they hoped for. Like a child having a tantrum, they’d rather ruin the game than gracefully accept defeat.

How does the left do this? By proclaiming that there is no objective truth, all meaning is subjective, and that morality is purely a product of the “haves and have-nots”—a power struggle between two forces fighting for domination.  Yet they do this under the guise of equality and tolerance, when it is anything but.

All the post-structuralism, deconstructionism, and critical and literary theory in the world can’t change the fact that postmodernism is nothing more than the sadistic rage of narcissists who can’t bear to accept that they can never have the utopia they want.

And, thus, we end up with feminists such as Luce Irigaray proclaiming that E=mc² is a “sexed equation” because “it privileges the speed of light over other speeds that are vitally necessary to us,” and Sandra Harding calling Isaac Newton’s “Principia Mathematica” a “rape manual.”

When all that remains is endless class struggle, repackaged from one form to the next, is it any surprise that Western culture has been consumed by resentment and despair?