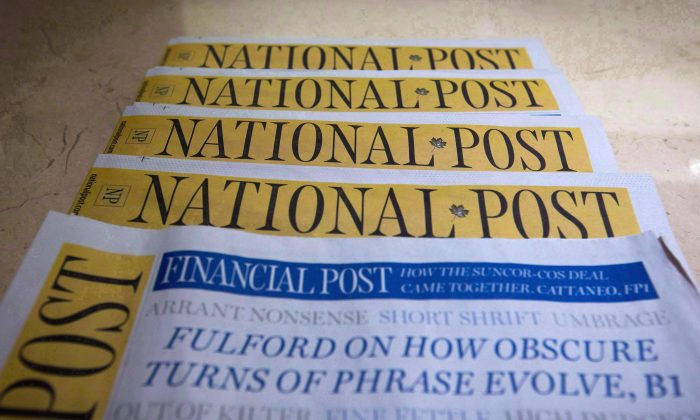 Copies of the Postmedia-owned National Post are displayed at a hotel in Burnaby, B.C. (The Canadian Press/Darryl Dyck)
Companies

His comment came after the Toronto-based company, which owns the National Post and other daily newspapers as well as other print and digital publications, reported a $15.5 million net loss in its third quarter ended May 31.

Postmedia’s overall revenue fell to $171 million, down 10 percent from a year earlier, reflecting a years-long, industry-wide shift in readership and advertising to digital forms of content through social media and the internet.

Print advertising revenue accounted for most of the decline, dropping by $14.8 million or 16 percent, while print circulation revenue fell by $4.5 million or nearly 8 percent. Digital revenue rose about $2 million to $29.9 million.

“We are encouraged to see our sixth straight quarter of double-digit revenue increases from our digital advertising initiatives yet we continue to see a rate of legacy revenue declination that outpaces our digital revenue growth,” Godfrey said in a statement ahead of a quarterly conference call with analysts.

“That reality means that we must continue to take the necessary steps to focus on areas where we can win and make the tough, yet decisive, decisions about where we need to make changes.”

Godfrey didn’t specify what further decisions are ahead but the company had set July 10 as a deadline for employees to decide on a voluntary departure program, as part of a plan to cut total salary by 10 percent by the end of August.

Postmedia has been reducing the number of print publications in stages and cutting staffing levels.

Most recently, the company announced it would stop printing daily newspapers in Portage La Prairie, Man., Kirkland Lake, Ont., and Pembroke, Ont., but will have a digital presence in the three communities.

An earlier deal last November, in which Torstar Corp. and Postmedia exchanged a total of 41 publications, mostly in Ontario, resulted in the closure of most of them.