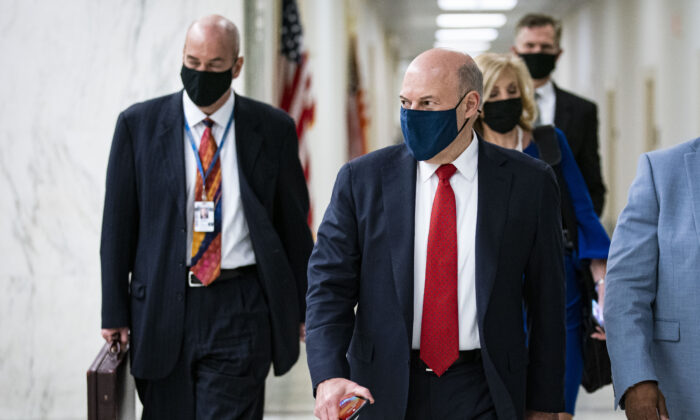 U.S. Postmaster General Louis DeJoy warned Americans to get used to “uncomfortable” postage rate increases in the coming years, as the USPS continues its effort to become financially solvent and independent.

During a Board of Governors meeting on Thursday, DeJoy told members that the Postal Service should be prepared to raise the price of stamps in order to cut deficits.

“I believe we have been severely damaged by at least 10 years of a defective pricing model which cannot be satisfied by one or two annual price increases, especially in this inflationary environment,” DeJoy told the Board.

As Postmaster General, DeJoy does not personally hold the power to raise rates unilaterally, a responsibility that falls upon the Postal Service Board of Governors. However, as the head of the organization, DeJoy’s recommendations are influential in the bureaucracy of the Postal Service, and DeJoy has asserted that he will continue to advocate for higher rates “we have accomplished our objective of projecting a trajectory that shows us being self-sustaining.”

DeJoy, appointed as Postmaster General in 2020, entered the agency with a strong business background and a mission to make the Postal Service financially independent. For many years, the USPS has been criticized for budgetary problems: Since 2007, the USPS has reported net losses of nearly $100 billion, and political pressure has mounted for radical reforms to make the agency cut costs and generate revenue.

DeJoy has been subject to partisan criticism for his history of donating to the Republican Party and for his amicable relationship with the administration of former President Donald Trump. At the start of DeJoy’s term, these connections had fuelled doubts about his longevity within the Biden administration.

However, these concerns have receded as DeJoy has received grudging acclaim from Democrats for his handling of mail-in ballots in the 2020 presidential election and distribution of at-home CCP (Chinese Communist Party) virus tests. Last month, President Joe Biden passed a $107 billion bill giving DeJoy the authority to overhaul the USPS, and members of both parties praised the agency for its response to the CCP virus pandemic.