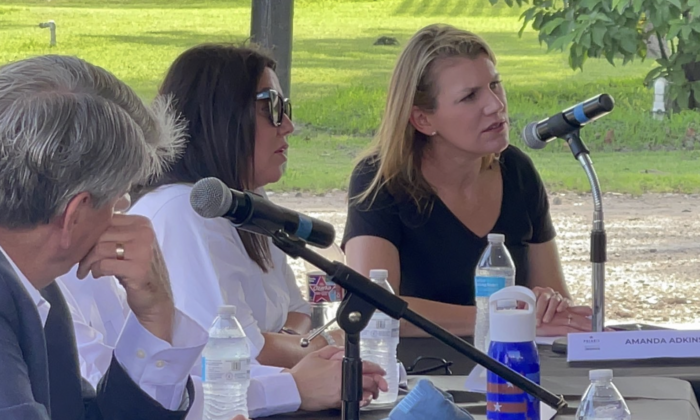 More than 900,000 Kansans voted in a special election on Aug. 2 and nearly 60 percent of them rejected a proposed amendment removing abortion access as a fundamental right from the state’s constitution.

The Kansas special election was the first public referendum on abortion following June’s U.S. Supreme Court repeal of Roe v. Wade, which returned regulation of the procedure back to states.

The Aug. 2 turnout, the largest ever for a Kansas primary, and result—a shocking red state upset—galvanized Democrat voters nationwide, brightening the party’s once-bleak prospects of retaining the U.S. House and taking the U.S. Senate in November’s midterm elections.

Suddenly, after decades of being on the defensive in shielding abortion rights, Democrats are seizing the offensive, campaigning under the mantle of individual rights, borrowing a plank from Republicans’ traditional platforms.

None are doing so more so than Kansas’ lone Democratic House member, who is hoping a post-Roe bump can overcome blue-to-purple redistricting and ambient angst with her party to win a “toss-up” rematch with a familiar opponent.

All four Kansas congressional reps are incumbents running in 2022 with three—all Republicans—projected to convincingly win new two-year terms in November.

The exception: Rep. Sharice Davids (D-Kansas), who is running for reelection in a revamped Kansas Congressional District 3 (CD 3).

In post-2020 Census redistricting by the GOP-dominated legislature, the metro Kansas City district was redrawn, turning a blue stronghold in a statewide sea of red into a purple district Republicans believe they can win in 2022.

The new maps, upheld by the Kansas Supreme Court, move rural areas into CD 3 while breaking up urban neighborhoods, teeing-up the prospects of sending an all-GOP Kansas delegation to Washington in 2023.

Kansas CD 3 is among the nation’s 36 most competitive congressional midterm races, according to Cook Political Report, which rates Davids’ reelection bid against Republican challenger Amanda Adams as a “toss-up.”

Before redistricting, the Cook Political Report Partisan Voting Index rated CD 3 as D+1. It has now revised its rating to R+1.

FiveThirtyEight rates the new CD 3 as “highly competitive” with a slight Democratic advantage swinging to Republicans. Its projection, which simulated the race 40,000 times, has Adkins defeating Davids 59-out-of-every-100 simulations.

Adams, a former Kansas Republican state committee chair who lost to Davids by 10 percentage points in 2020, easily powered past party rivals in the Aug. 2 GOP primary to win a rematch with Davids.

The redistricting shift that boosted Republican voters in CD 3 has correspondingly funneled more in donations to Adkins’ campaign, further fueling optimism that Republicans can take the seat.

According to OpenSecrets.org, Adkins’ July 13 Federal Elections Commission (FEC) campaign filing reported she had raised more than $2.2 million, spent nearly $780,000, and had more than $1.47 million in cash on hand.

That $2.2 million, garnered as of nearly two months ago, was already more than the $2.1 million Adkins raised in her 2020 campaign against Davids.

But Davids, a former mixed martial arts (MMA) professional fighter, is aggressively defending her seat—and she has the war chest to buy plenty of ad space and air time.

According to OpenSecrets.org, Davids’ July 13 FEC campaign filing said she had raised nearly $4.7 million—nearly twice Adkins—spent more than $1.684 million, and had nearly $3.486 million in cash on hand.

Davids, an attorney and member of the Ho-Chunk Nation, has been touring all five CD 3 counties, touting her seating on the House Agriculture and Small Business committees as good fortune for local farmers and commercial interests.

But what Davids has really been doing is pounding away for Adkins for being “a pro-life advocate” who “100 percent” voted for the failed amendment.

“When 50 years of precedent protecting our rights was overturned and removed, people got scared, they got anxious, lives were upended and people got angry,” she said after the ballot measure was defeated on Aug. 2, signaling she would make abortion rights a key campaign issue.

Davids’ campaign has since, and often, highlighted that Adkins was campaign manager for former governor and U.S. Sen. Sam Brownback, a staunch abortion abolitionist, and was state GOP chair when it lobbied for the proposed “Human Life Amendment” to the U. S. Constitution and bills seeking 14th Amendment protections for “unborn children.”

Immediately after the Supreme Court’s ruling was formally posted on June 24, Adkins issued a statement saying she was “pleased that the Supreme Court returned decisions related to abortion back to the states because it gives voters more of a say on the issue.”

“Most Kansans agree we want to reduce the number of abortions, support parents of minors being notified if their child is seeking an abortion, eliminate late-term abortions, oppose taxpayer funding of abortion, and support safety regulations in clinics,” Adkins continued.

“By contrast, Sharice Davids is so extreme that she has supported taxpayer-funded abortions, opposed life-saving medical care for newborn babies who survived an abortion, and opposes any restrictions on abortion up to the point of birth.”

In campaign literature, Adkins cites “recognizing the value and dignity of life” among her priorities.

“As a pro-life advocate, I am committed to supporting life from conception until natural death,” she states. “I celebrate the dignity and value of every citizen as informed by my strong faith and experiences as a mother.”

In an Aug. 25 Kansas City Star op-ed, Adkins reiterated that she is still “a pro-life candidate” and clarified that she didn’t support a federal abortion ban, “nor do I support any other federal policymaking related to contraception or fertility.”

In a same-day statement in response to the op-ed, Davids accused Adkins of trying to hide her connections with Brownback and legislative efforts to restrict access to abortion.

“My position is clear: I believe people have a right to make their own health care decisions, not the government, and I have stood up against extreme politicians who want to take away that right,’ Davids said. ‘Those are the facts, and that is the choice that voters face this November.”

Adkins has not shied away from being a “pro-life advocate,” but the facts her campaign have been focusing on don’t emphasize the abortion issue, but Davids’ ties to Biden’s policies, especially when it comes to the economy and the border, which she toured in Texas in late August.

“Too late … #KS03 families paying an extra $6,000 this year due to inflation know the negative impact of her votes.”