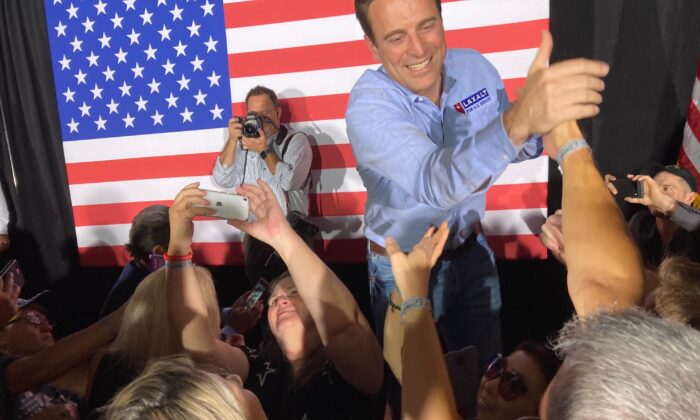 A tossup U.S. Senate seat in Nevada, one of five in which Republicans are focused on ousting Democratic incumbents they see as vulnerable, is among the November midterm races that could be influenced by voter response to the Supreme Court’s June repeal of Roe v. Wade.

The Supreme Court ruling, which kicked abortion regulation back to the states, appears to be spurring turnout among Democrats, as evidenced in Kansas, where voters on Aug. 2 rejected a proposed amendment from conservatives to remove support for abortion access from the state’s constitution, and in an Aug. 23 special congressional election in New York, where pro-abortion voters turned out in force to defeat a favored Republican candidate.

The incumbent Democrat appears to be garnering “sizable” gains in support “among women and white voters” in the wake of June’s Roe repeal, Suffolk University Political Research Center Director David Paleologos said in a statement accompanying the poll.

Among the women who participated in the poll, Cortez Masto led by 23 points, 53 percent to 30 percent, up from 6 percentage points in April before May’s Nevada primaries.

Analysts rank the Cortez Masto-Laxalt race uniformly as among the five most competitive of the 35 Senate 2022 midterm contests. Cortez Masto’s Senate seat is among 14 held by Democrats and 21 occupied by Republicans on ballots across the country.

Democrats currently control 50 Senate seats, including two independents who caucus with the party, and are the majority party in the chamber since Vice President Kamala Harris serves as a tiebreaking vote. Republicans need a net gain of one seat in November to retake the majority.

The parties are also battling in tight races to win open Senate seats vacated by Republicans in Ohio and Pennsylvania. The GOP is fending off a competitive challenge in Wisconsin to Sen. Ron Johnson’s (R-Wis.) reelection bid.

Of eight analytic forecasts, six call that race is a tossup. Cook Political Reports classifies the state as purple R+1 while FiveThirtyEight conversely rates it as “lean Democratic.”

In a Sabato’s Crystal Ball Aug. 4 analysis, Kyle Kondik writes that of the five targeted Democrat Senate incumbents, “Our general feeling is that Cortez Masto is the most vulnerable, marginally more so than the others.”

Nevada is “a bit more of a working-class state than Arizona or Georgia, lacking the volume of growing, highly-educated suburbs that have been trending Democratic over time,” he writes.

Democrats have done well in Nevada because of support from Latino voters.

“There are some indications that Democrats are losing ground with that group—although, it must always be stressed, Latino voters are not monolithic,” Kondik writes.

Laxalt “is not a superstar Republican recruit,” but “he does at least stand out for being a prior officeholder and someone who has been through tough races in the past.”

The post-Roe spike in enthusiasm among Democratic voters could blunt the “red wave” many prognosticators projected to sweep the 2022 midterms, including Nevada—a state with a history of alternate ‘waves” and a significant bloc of unaffiliated voters.

But the same poll that indicates Laxalt trails Cortez Masto because of a possible post-Roe bump also confirms Laxalt’s campaign focus on kitchen table issues is on target and could prove more sustainable as an issue come November.

While 52 percent of respondents indicated their views on abortion will affect which candidates they vote for, only 13 percent said it was their most important single issue.

Inflation and the economy, 34 percent said, were their chief concerns. Among those voters, Laxalt led Cortez Masto, 60 percent to 21 percent.

The poll showed Nevadans’ discontent with the economy. In April, 72 percent said the state’s economy was “fair or poor.” In August, 74 percent rated it the same, with 46 percent claiming their standard of living is worse than it was two years ago. Only 17 percent said it was better.

Laxalt’s campaign cites the economy as its top issue and states that “the misguided policies of President Joe Biden and Senator Catherine Cortez-Masto have left Nevada families at or near the bottom in nearly every statistical area.”

In Washington, Laxalt pledges to “restore fiscal sanity by stopping the spending spree that has led to record-breaking inflation. The price of groceries, gas and everyday household goods amount to a massive tax increase on Nevadans that makes life at the lower-income end unworkable—the ends just don’t meet anymore.”

A Reno native, Laxalt, 43, is a U.S. Navy Iraq War veteran who served in the Judge Advocate General’s Corps alongside DeSantis, a former aide to then-Undersecretary of State John Bolton, and a private practice attorney who was elected Nevada attorney general in 2015. He was the GOP gubernatorial nominee in 2018, losing to Sisolak.

Laxalt is the son of former Sen. Pete Domenici (R-N.M.) and grandson of former Nevada governor and Sen. Paul Laxalt (R-Nev.). He co-chaired Trump’s 2020 reelection campaign in Nevada and is endorsed by the former president.

He has hammered away at Cortez Masto over inflation and runaway Democratic spending, noting the incumbent votes with Biden administration initiatives 92 percent of the time.

Laxalt said the “Cortez Masto agenda” means “families across our state are struggling to get by amid 40-year-high inflation, record gas prices, and shortages of baby formula and other key essentials.”

Cortez Masto, however, said the student loan bailout is not part of her “agenda,” joining Republicans in criticizing Biden’s action because it does not address the real issues making college unaffordable.

“I don’t agree with today’s executive action because it doesn’t address the root problems that make college unaffordable,” she said in a statement. “We should be focusing on passing my legislation to expand Pell Grants for lower-income students, target loan forgiveness to those in need, and actually make college more affordable for working families.”

A Las Vegas native, Cortez Masto began her career as a federal criminal prosecutor in the District of Columbia before returning to Nevada to serve as assistant Clark County manager and chief of staff for Gov. Bob Miller.

She serves on four committees, most notably as chair of the Senate Energy and Natural Resources Committee’s Public Lands, Forests, and Mining Subcommittee.

Among legislative achievements cited by her campaign is co-sponsoring the Healthy Maternal and Obstetric Medicine (Healthy MOM) Act, the DREAM Act, the Marketplace Certainty Act, and Clean Energy for America Act.

Cortez Masto maintains she is a “fervent supporter of comprehensive immigration reform” and renewable energy production. Her campaign states that a second term would allow her to continue addressing the “affordable housing crisis in Nevada” while strengthening and protecting Medicare and Medicaid.

She had raised more than $29.15 million, spent $19.5 million, and had $9.85 million in cash on hand, according to her campaign’s Federal Elections Commission (FEC) filing on June 30, the last required quarterly report.

The fundraising gap and post-Roe effects among Democratic voters have GOP officials in the state and across the country doubling down in the drive to flip Cortez Masto’s seat red.

DeSantis, seeking reelection in Florida amid speculation about his presidential ambitions, joined the fray in the desert with a June 30 fundraising appeal on Laxalt’s behalf.

“I’m FURIOUS,” he says in the pitch. “I can’t believe it: Joe Biden & Chuck Schumer dropped a whopping $20+ MILLION bucks to destroy my friend & our Nevada GOP nominee, Adam Laxalt, in the MOST important Senate race on the map. If the Democrats beat us & keep this seat blue, it’s all over.”

DeSantis calls on donors to help finance “our one chance to hand Biden, Schumer, and the liberal news media a crushing defeat,” noting: “Adam is a former Naval Officer & Iraq War Veteran, and a God-fearing American like us. He is everything the radical Left fears the most. … Don’t let the radical left smear and destroy a good man.”