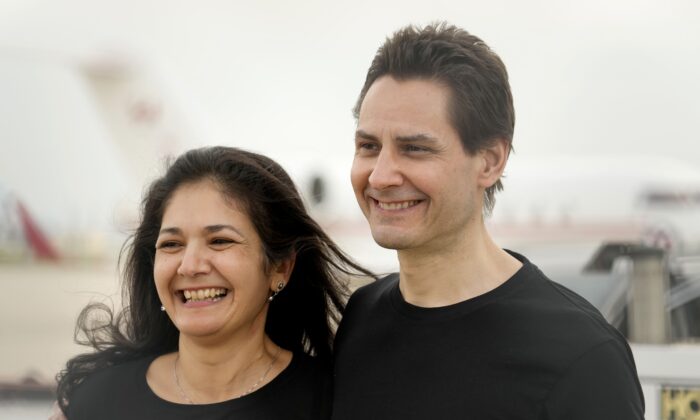 Michael Kovrig with his wife, Vina Nadjibulla, after arriving at Pearson International Airport in Toronto on Sept. 25, 2021. Kovrig and fellow Canadian Michael Spavor were imprisoned in China on baseless charges for nearly three years. (The Canadian Press/Frank Gunn)
Viewpoints

In his famous 1947 article “The Sources of Soviet Conduct,” the American diplomat and historian George Kennan described the “innate antagonism” between socialism and capitalism and how this had become “deeply embedded” in the foundations of the Soviet regime, making peaceful coexistence between the Soviet Union and the West difficult.

“It means that there never can be on Moscow’s side any sincere assumption of a community of aims between the Soviet Union and powers it regards as capitalist,” he wrote.

Kennan’s observation comes to mind as we observe how things have unfolded between China and the West, particularly Canada.

Feelings of mass elation swept Canada last week as Michael Kovrig and Michael Spavor were finally released after having spent over 1,000 days in captivity in China, right after Meng Wanzhou was released due to a deal struck with Washington to drop charges.

The swiftness with which Beijing released the two Michaels—which state propaganda risibly maintains was by happenstance and had no connection to Meng’s release—acts as a tacit admission that the two Canadians were indeed political pawns all along.

Beyond that, it showcases that when it comes to the Chinese Communist Party (CCP), there is no going back. The regime continues to show us that it doesn’t care much about what the democratic world thinks and will continue to use such tactics in order to get what it wants, since such bullying proves to have worked.

The question being asked across the spectrum is where we go from here in our relationship with Beijing.

In his address at the recent 76th session of the United Nations General Assembly, Xi Jinping put forth his usual fatuous proclamations that China seeks to help create a world that emphasizes “dialogue and co-operation … over confrontation and exclusion.” And create “a new type of international relations” that will “expand the convergence of our interests and achieve the biggest synergy possible.” Because, after all, “China has never and will never invade or bully others or seek hegemony.”

The entire speech, as are all Xi’s speeches at international forums, is an attempt to present China as a more virtuous partner and custodian of the international order than the overbearing, manipulative aggressors in Washington. Meanwhile, Chinese state propaganda has issued what amounts to threats against countries like Canada.

A Sept. 26 Global Times article accused Ottawa of “serving as a lapdog of the U.S. government” in the Meng case and insinuated that good-natured Canada-China relations depend on Ottawa’s “strategic autonomy.” It essentially means that Canada must side with Beijing over Washington if tranquil relations are to proceed in the aftermath of the Meng affair.

Disappointingly, some China enthusiasts in Canada are echoing this line, contending that our troubles with Beijing have stemmed not from the CCP’s ruthlessness but our relationship with Washington. Academic Wenran Jiang—who has pushed for closer ties to China and defended Beijing’s Confucius Institutes—outlandishly stated in a column over the weekend that “the United States, assisted by Canada, took Meng hostage” and implied that we should try to reset relations with China with this problem out of the way based on the “lessons we have learned” instead of going the hawkish route.

This is all bilge, of course. Aside from the fact that Meng’s time in Canada was something akin to an extended luxury vacation in comparison with the stark conditions the two Michaels endured in China, the column framed the retaliatory capture of the two men in the first place as an aberrant reaction to a perceived injustice. Canadian Falun Gong practitioner Sun Qian and Uyghur Canadian Huseyin Cecil, as well as over a 100 other Canadians illegally imprisoned in China, would beg to differ, their stories being ample testament to the customary nature of this practice.

The lesson that should have been learned a long time ago, and that bears repeating, is that the CCP at its core is the most disruptive force in the world today and our policy toward it must now, more than ever, reflect that.

The Trudeau government’s public pronouncements don’t give any signs of imminent changes, however. Foreign Minister Marc Garneau said on Sept. 26 that Canada’s “eyes are wide open” regarding China but maintains that the government will practise a policy oscillating between coexisting, competing, co-operating, and challenging.

This approach will continue to result in the same reluctance to take substantial action on Beijing’s transgressions, lest Ottawa offends the regime and ostensibly jeopardizes its co-operation on issues deemed a priority, such as climate change.

The CCP, however, has made it clear that it does not separate supposedly mutual concerns such as climate change from the broader geopolitical agenda. Like everything else, its claims to the contrary are a cynical ploy.

“The U.S. side hopes that climate co-operation can be an ‘oasis’ in China-U.S. relations,” Yi said, “but if that ‘oasis’ is surrounded by desert, it will also become desertified sooner or later.”

In other words, Beijing’s co-operation on climate change is contingent upon whether the United States and the West are willing to capitulate on other issues such as Taiwan and human rights. The cynicism is laid bare.

All of this once again underscores that, like with the Soviets during the Cold War, it’s unrealistic to expect there will be a sincere “community of aims” between China and the West. And given what we know of the nature of the CCP and how it operates, that’s unlikely to change anytime soon.