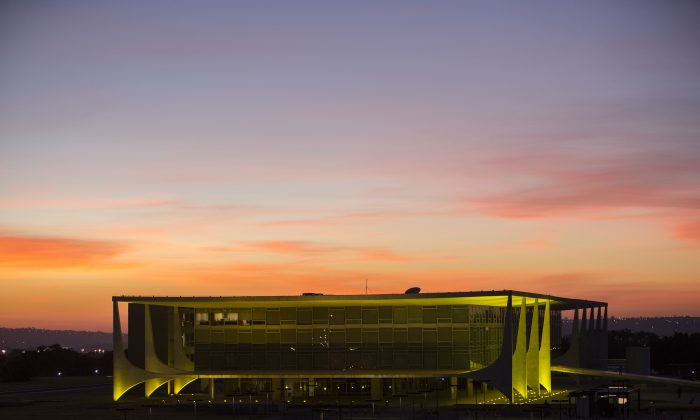 Planalto presidential palace during sunrise in Brasilia, Brazil, after the Senate voted to suspend President Dilma Rousseff pending an impeachment trial, on May 12, 2016. For the sake of the nation’s 200 million people, and for all the South American nations whose fortunes are tied to Brazil’s powerhouse economy, one hopes that her vice president, now acting president, Michel Temer know what to do. (AP Photo/Felipe Dana)
Americas

SAO PAULO—To say that Michel Temer faces huge challenges would be an understatement.

Brazil’s 75-year-old acting president must fight the Zika virus, which can cause birth defects and has ravaged thousands of families in poor northeastern states. He must rescue Latin America’s largest economy from its worst recession since the 1930s, most likely by making painful—and protest-invoking—cuts to the pension system and social welfare spending.

He must win back the trust of a populace that has come to believe virtually all politicians, including him, are lining their pockets with taxpayer money.

And he must begin these gargantuan tasks with the Summer Olympics just months away and while his predecessor and former-ally-turned enemy, Dilma Rousseff, is living in the presidential residence and rallying supporters around assertions she was the victim of a coup led by Temer.

“This is going to be a real mess. The combination of all these factors at once is unbelievable,” said Alexandre Barros, a Brasilia-based consultant. “Everybody is unhappy with the situation but nobody knows what to do.”

For the sake of the nation’s 200 million people, and for all the South American nations whose fortunes are tied to Brazil’s powerhouse economy, one hopes that Temer does know what to do.

The career politician, who is married to a 32-year-old former beauty pageant contestant, took office on Thursday just hours after the Senate voted to impeach Rousseff for allegedly using illegal accounting tricks to hide deficits in the federal budget. Rousseff insists she has done nothing wrong, and vows to fight as the Senate holds a trial, a process that can take up to six months.

If the Senate votes to remove Rousseff, as is likely, Temer would complete her term that goes through 2018.

Temer is getting early kudos for one Cabinet choice: Finance Minister Henrique Meirelles is widely respected for serving as Central Bank chief during the boom years from 2003 to 2010.

Meirelles quickly signaled that he’ll push to revamp labor laws to increase productivity and reform a pension system known for generous payouts and early retirement; many public workers can retire between their early and mid-50s.

Actually pulling that off will be very difficult. Many lawmakers in Congress rallied around the idea of ousting Rousseff, but building consensus around unpopular reforms could prove elusive. Still, the ongoing crisis combined with the reality that there will be no near-term rebound in the prices of commodities, Brazil’s lifeblood, could be strong incentives for change.

Analysts also believe that Temer, who has said he won’t run for president in 2018, will be thinking about his legacy. This could be Temer’s last stint in any office: He was recently found guilty of violating campaign finance laws, a decision that makes him ineligible to run for office for eight years, pending likely appeals.

“If Temer gets the ball rolling on major reforms, this would take him to the level of statesman,” said Marcos Troyjo, a professor at Columbia University’s School of International and Public Affairs.

Aside from Meirelles, however, Temer is already coming under sharp criticism for the rest of his Cabinet, which is widely criticized as an example of vast inequality in a nation that is predominantly non-white.

Temer’s entire Cabinet is made up of white men, including some with very thin resumes and others who are under a cloud of corruption allegations.

Rousseff, the nation’s first female president, wasted no time in making contrasts with her much more diverse outgoing Cabinet.

“I think gender questions are a question of democracy in a country where the majority, more than 50 percent, are women,” she said Friday, the first day of Temer’s government.

Noting that her nation was the last in the Americas to outlaw slavery, in 1888, she added: “Here in Brazil, discrimination has a face: It’s black, woman and child.”

One of Temer’s biggest challenges, if not a direct threat to his presidency, is the so-called Car Wash probe. Led by judge Sergio Moro, investigators uncovered a multi-billion dollar kickback scheme centered on the state oil company Petrobras that has astonished even a populous long inured to political graft. In two years, dozens of the country’s elites have been ensnared, from top lawmakers to businessmen.

Former House Speaker Eduardo Cunha, a member of Temer’s Democratic Movement Party and the architect of the impeachment push against Rousseff, is facing charges related to the probe. The Supreme Federal Tribunal, the country’s highest court, recently removed Cunha from office.

Temer himself has been implicated by witnesses and a recently ousted senator who reached a plea deal with prosecutors. However, he has not been charged.

In his first words to the nation, Temer promised to support the Petrobras probe. However, it runs so deep that it could undermine his ability to woo legislative support. According to watch dog groups, 60 percent of the 594 members of Congress are facing allegations of corruption, many directly related to the probe. That tally includes many members of Temer’s party and close allies in other parties.

Whatever Temer’s intention, it’s hard to imagine the probe being stalled. Many Brazilians, infuriated by the sheer scope of the stealing, believe it’s necessary to clean up the country. Indeed, one of the biggest factors in Rousseff’s tanking popularity was the probe. While she was never implicated herself, many of the alleged bribes happened over the 13 years her Workers’ Party ran the country.

“I am sure corruption will continue being part of Brazilian politics under Temer,” said Daniel Sandim, a 29-year-old cellphone technician in Sao Paulo. “But thanks to impeachment, the corrupt will be less corrupt, knowing that the people are watching and will not be silent.”

Amid all the problems, there are some bright spots. The country is heading into the Southern Hemisphere’s winter, which brings a few months of respite from often oppressive heat and humidity. Lower temperatures mean fewer mosquitoes, which means fewer new Zika cases, at least until spring begins in September.

And the Olympic Games in Rio de Janeiro, which Temer will declare open on Aug. 5, could prove to be a distraction for a nation that has weathered little more than bad news for several years.