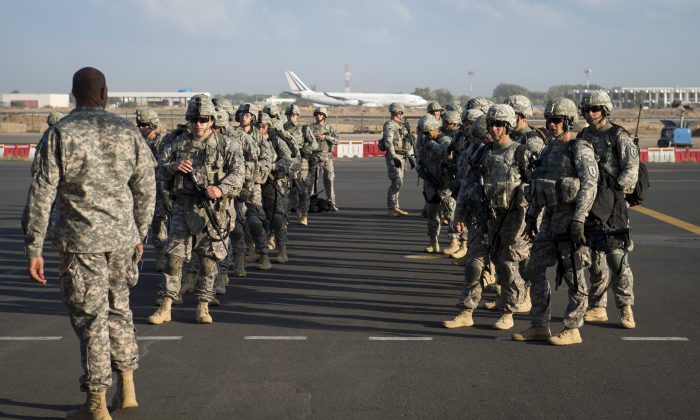 When a trio of U.S. lawmakers introduced legislation in July that would curb presidential war-making powers, they said an overhaul is required because the executive branch has run amok with the 2001 Authorization for Use of Military Force (AUMF)—passed in response to the 9/11 terror attacks.

“Today, we have combat troops in over a half-dozen countries in the world with no debate from Congress,” Sen. Chris Murphy (D-Conn.) said at the time, claiming that the 2001 AUMF has been used to justify military operations in seven countries.

“Since the passing of the 2001 AUMF, the Bush, Obama, Trump, and Biden administrations have referenced this authorization … in a growing number of countries to fight a growing number of militant groups, including Al Qaeda and other groups that government officials subsequently identified as arising from it, including the Islamic State of Iraq and Syria (ISIS) and al-Shabaab in Somalia,” said the report, authored by Costs of War Project co-director Stephanie Savell.

“All four administrations have cited the 2001 AUMF while using vague language to describe the locations of operations, failing to accurately describe the full scope of activities in many places, and in some cases simply failing to report on counterterrorism hostilities.”

The report said the 2001 AUMF was used to justify counterterrorism operations or airstrikes in eight countries: Afghanistan, Iraq, Pakistan, Syria, Libya, Yemen, Somalia, and Djibouti. In addition, the authorization has been cited in numerous counterterrorism “support” activities in 13 countries, including Chad, Ethiopia, Kenya, and Turkey.

The 2001 AUMF also is used to justify operations at the detention facility in Guantanamo Bay, Cuba, the report stated.

Much of the executive branch’s reporting on its use of the 2001 AUFM is incomplete, according to the report. This is the case with the Obama administration’s operations in Libya, the report stated.

“In 2013, the Obama administration reported [to Congress] that in Libya, ‘U.S. armed forces captured a member of Al Qaeda,’ referring to accused al-Qaeda operative Abu Anas al-Libi, but made no reference to a continued U.S. airstrike campaign, even though the U.S. conducted three strikes against militants in Libya that same year,” the report stated.

In other cases, the executive branch reported on “support for counterterrorism operations,” but didn’t acknowledge that U.S. troops were or could be involved in hostilities with militants, according to the report.

“For example, in Niger in 2017, four U.S. service members were killed in an ambush as they attempted to carry out a raid on a militant compound, but President Trump cited the AUMF only after this incident came to light,” the report stated. “Another example is the citation of ‘support’ for CT operations in Kenya but failure to acknowledge a combat incident in January 2020, when Al Shabaab militants attacked a U.S. military base in Manda Bay and killed three Americans.”

The report warned that a lack of reporting from the executive branch could leave Congress blind to the possibility that the United States could be “sliding towards conflict in a number of African countries.”

The legislation introduced by Sens. Murphy, Mike Lee (R-Utah), and Bernie Sanders (I-Vt.) would change this situation, but it hasn’t gained more co-sponsors. Likewise, legislation to repeal the 1991 and 2002 AUMFs against Iraq was reportedly left out of the 2022 National Defense Authorization Act (NDAA), despite gaining more than 26 co-sponsors and 60 votes—and despite the House approving similar legislation in June.

Murphy said in July said he knows the legislation faces an uphill battle since it won’t be supported by the executive branch.

“Do I expect that the Biden administration is going to send out a statement of support for this legislation, or be eager to sign it? No,” Murphy said at the time. “But our hope is that this bill … will stimulate a conversation in Congress that might give us the inspiration to use the powers we currently have to make sure we’re properly declaring war.”