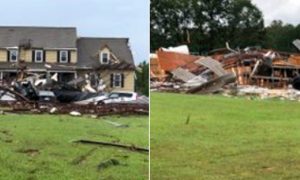 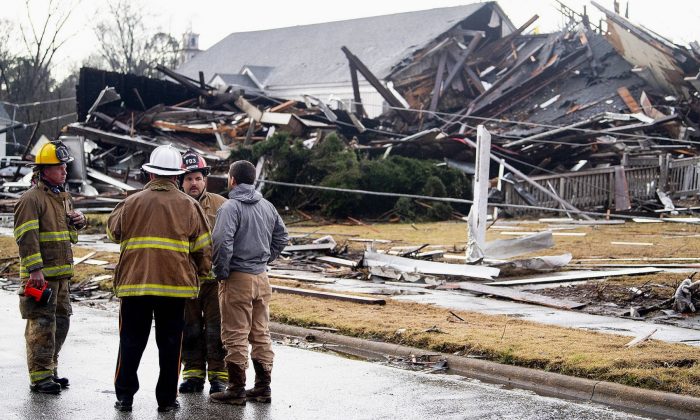 The remains of the damaged historic First Presbyterian Church in Wetumpka, Ala., is seen after a possible tornado on Jan. 19, 2019. (Mickey Welsh/The Montgomery Advertiser/AP)
US News

Wetumpka Mayor Jerry Willis told the Montgomery Advertiser that one injury was reported, but it wasn’t serious.

A senior center and the police department were among the buildings damaged from the afternoon storm, he said. Video from the scene showed several collapsed buildings, overturned cars, and toppled trees and power lines.

State emergency management officials estimated 35 homes throughout Elmore County were damaged, according to WSFA-TV. That doesn’t include businesses, churches, and other structures.

“It’s bad, when you love a place as much as we love Wetumpka, to see this devastation,” said Willis, who was grateful for the lack of injuries.

Extensive damage from a possible tornado has been reported in Wetumpka, Alabama: https://t.co/rziJlQ5gJN (Photo: @TigerTrey3) pic.twitter.com/QYqm4CO2eK

“If this had been during the week with schools in session or Sunday morning with churches at worship, it would have been absolutely devastating as far as injuries and even fatalities,” he told the newspaper. “We’ll come back. We’ll clean up and come back.”

Alabama Power said about 2,000 customers were without service on Saturday in Wetumpka, and crews were evaluating the damage, WSFA-TV reported.

Wetumpka is in central Alabama, about 15 miles northeast of Montgomery. The federal government estimated the city’s population to be about 8,100 in 2017.

Damage also was confirmed in nearby Autauga County.

A mobile home overturned near Independence community, but no injuries were reported, Sheriff Joe Sedinger said.

The National Weather Service in Birmingham said radar indicated a tornado was in the area.